You might remember that RTÉ's Claire Byrne Live held a debate on a United Ireland last month. The most memorable thing to come out of the programme was Joe Brolly being cut out of the show after making comments about panelist Gregory Campbell and the DUP. The DUP MP had already appeared on the show but could not reply to the comments.

It was not the first time that Brolly and Campbell debated the tensions between the nationalist and unionist communities in a public arena. The men shared a debating table back in 2016 at Féile an Phobail as part of the 'West Belfast Speaks' series, alongside Naomi Long and Martina Anderson. Today Brolly tweeted an excerpt from that event.

Given the inflamed tensions between the two communities in Northern Ireland at the moment, it's worth revisiting this debate. Brolly made some very interesting statements about the role that senior Unionists political figures play in spreading misperceptions about the GAA and the Irish language to working class unionists, comments which ultimately keep the communities divided

I have no doubt that there are working class kids around the Diamond and that who think that in Dungiven it's like North Korea. The children are lining up in squadrons and marching up and down the Kevin Lynch's pitch and being trained in small arms. This image that must be created is of 'these Fenian bastards, you wouldn't know what the fuck are they at'. That's the message, Gregory. And you know that that's the message. It's 'you've got to watch these Fenians'. 'Terrorist sympathisers'. I just get this image of North Korea when I hear him talking about it.

You wouldn't get us ever talking about any area - deprived areas in particular - where kids are deprived of education. And I know a lot of those areas in East Belfast, a lot of those areas around Antrim and Larne where there's serious deprivation, myths are being peddled to them all the time and instead of real work being done to regenerate, self-help, confidence...And what you said is absolutely right, it's a really true thing. That there is a confidence in the nationalist community. Boys like you, and I have to say, and in fairness, I have to say you can hold your own like nobody's business in front of 500 or 600 people. You could be leading just as easily as you are negatively peddling negative messages.

Watch the clip below.

Gregory and me at the Belfast festival some years ago. Discussing the GAA....... pic.twitter.com/KWOnghscM6

And in case you're interested in seeing Campbell's response, you can watch the entire debate from the 2016 Féile an Phobail here. This particular debated kicks off around the 50 minute. Watching it, it's no surprise that we're back to this very same place. Real change starts with real leadership.

Surely part of the solution to the ongoing problems in Northern Ireland is a radical change in mentality from senior DUP members. 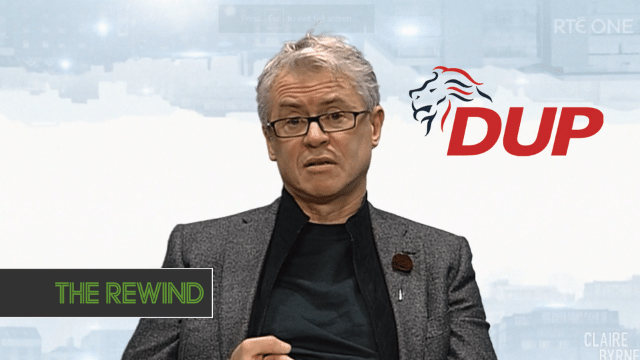