The Most Memorable Sporting Cameos From The Late Late Toy Show

'The Late Late Toy Show' airs tonight. In a world of darkness, it is one of the last beacons of pure televisual joy. Given the challenging year we've all endured, we need the Toy Show more than ever.

As the Late Late Toy Show has had its stride as a cultural phenomenon over the last decade, it has often been the interaction between children and sports stars that have been most moving. It's so easy to be cynical about the world of sport, but to see the awe that children experience in the presence of their sporting heroes is to remember why so many of us fell in love with sport in first place.

Here are some of the best Late Late Toy Show appearances from Irish sports stars in recent years. We're looking forward to a few more surprises this evening.

The set up: Domhnall, the world's biggest Robbie Keane fan, is playing a game of FIFA13, discussing his favourite footballer. Little does he know that the LA Galaxy striker is backstage.

Why we love this: Domhnall is an absolute star. He shows great knowledge of Robbie's injury history and the intricacies of his cartwheel goal celebration. And Robbie is in excellent form despite being on crutches.

Domhnall also correctly predicts that Ireland will qualify for Euro 2016, so that's wonderful. Domhnall's appearance went so well, he would made a cameo on the LLS the week after.

The set up: 9-year-old Charlie is an aspiring golfer who knows everything about Rory McIlroy's career. Little does he know that Rory McIlroy is backstage.

Why we love this: Charlie's knowledge of Rory's career is incredible and we love how starstruck he is in McIlroy's presence. Charlie also forces McIlroy into interesting admission about the shortcomings in his own game.

The set up: Michael O'Brien is discussing his favourite manager in the GAA, Davy Fitzgerald. Little does he know that Davy Fitz is secretly backstage.

Why we love it: This is just everything. Michael is some man, a young lad with serious auld lad energy. He asks Davy the perfect question. 'Where do you get your passion?'

Michael's hunger for Davy autographs is also commendable. Strike while the iron's hot!

The lads would go on to make a pretty special programme for RTÉ.

The set-up: Ella Thompson, a talented young boxer from Dunboyne, is on stage discussing her passion for boxing. Little does she know that Ireland's greatest boxer Katie Taylor is secretly backstage.

Why we love it: This was incredible television. All of these clips are heartwarming but this is really special because of Ella's own boxing ability. Katie puts on the boxing pads and Ella throws punches bareknuckle and some of the greatest television Ireland has ever produced takes place.

The set up: Ella is an aspiring golf prodigy and her favourite golfer is Shane Lowry. Little does she know backstage at the Late Late Toy Show is Shane Lowry.

Why we love this: Ella had put on an excellent chipping display before Lowry's arrival that's not in this clip. She's absolutely stunned to meet Lowry, who'd only won the Open a few months previous. It's also a class gesture from Lowry to bring the flag from the 18th at Portrush.

The set up: Evan is a huge rugby fan. Little does he know that Jamie Heaslip is backstage waiting to meet him.

Why we love this: Evan is just brilliant interacting with Heaslip.

The set up: Daniel is a massive Galway hurling fan. Little does he know that backstage at Late Late Toy Show are five members of the Galway team are backstage with Liam MacCarthy.

Why we love this: The look of joy on Daniel's face when he lifts Liam MacCarthy as if he was up the Hogan Stand steps. 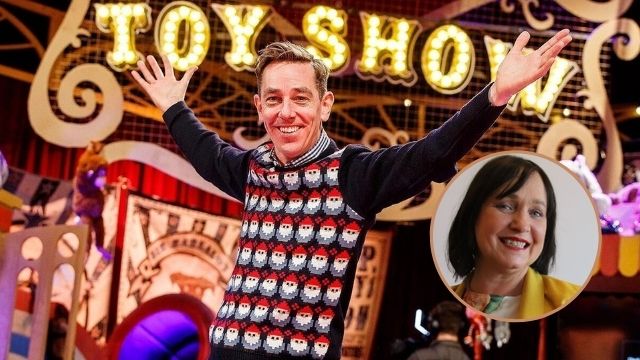 The Rewind
8 months ago
By Andrew Dempsey
Watch: The Cranberries Late Late Show Tribute Was Brilliant
The Rewind
9 months ago
By Jonathan Byrne
Gerry Hannan Vs Frank McCourt - The Most Bizarre Late Late Show Argument Of Them All
The Rewind
2 years ago
By Balls Team
Viewers Loved The Late Late's Emotional Tom And Nanny Pat Reunion
Popular on Balls
GAA
2 days ago
By PJ Browne
Cusack Has Little Sympathy For Gearoid Hegarty After Red Card
Football
7 hours ago
By PJ Browne
Man Arrested For Headbutting Billy Sharp After Playoff Semi-Final
GAA
1 day ago
By PJ Browne
GAA President Explains Why Tailteann Cup Won't Be All-Ireland Curtain Raiser
Football
3 days ago
By Eoin Harrington
Alan Shearer Says Roy Keane "Ran Away" From Him After Famous Clash