Line Of Duty: The Scene In Season One Where The 'H' Plot Was Briefly Revealed

For most of the 12 million people who watched Line Of Duty on Sunday, the season six finale was something of a let down. You can divide the disappointed into two camps. There are people who feel massively shortchanged by the reveal that blundering policeman Ian Buckells was the mysterious 'H' character. Then there are people who feel annoyed by the execution of the episode, especially the strange prison van intercept and the odd 'no one makes mugs of AC-12' interview scene, where Carmichael is oddly absent.

While it felt like viewers were being prepared for an epic revelation, it must be said that the seeds of Sunday's final episode go all the way back to scenes in the first season. In fact, there's a short scene in Season 1, Episode 6 where Mercurio essentially revealed the architecture of the police corruption network he was building.

In the scene, Tommy Hunter has just been arrested. Dot Cottan arrives on the scene and ask Ian Buckells if he can grab a word with Hunter in the back of a police van. Buckells agrees and makes a Buckells-esque remark about Cottan getting a promotion, which Hunter would have surely noted.  Here we see three of the most pivotal characters in the programme all crossing paths.

This scene was first spotted by Twitter's most eagle-eyed LOD account back in March, who tweeted the extended cut of the scene. Moments later, Cottan lets his mask slip and lays the groundwork for Hunter to cooperate with the investigation into the Greek Lane killing in return for immunity.

Enjoyed the Obsessed with Line of Duty podcast on @BBCSounds. Great pod - well worth a listen.
Although, I think that @Cparks1976 (aka @DCottan) should have given full disclosure that DI/DS Buckells allowed DS Cottan and Tommy Hunter permission to speak post arrest. #LineofDuty pic.twitter.com/HvOTJWjp1k

'I owe you a pint, Sir,' Cottan declares to Buckells after leaving the van. In the moment, it seemed like Buckells could have had no idea about what Cottan really meant, but in actuality, the pair were thick as thieves.

Interestingly, Nigel Boyle, who plays Buckells, revealed he only learned he was going to be named as H halfway through the filming of season 6.

"We'd had the first four scripts and started filming some of series six when we had to stop due to the first lockdown. When we were about to resume filming, Jed sent me a text saying, 'Are you free for a chat at some point today? Don't worry it's not that call...'

"Which I took to mean that I wasn't going to end up dead! But I was still quite nervous and not sure what he wanted to talk to me about.

He called me and said, 'The scripts for the next episodes are going to be sent out imminently and so it's time to tell you the secret that I've been keeping, you're going to be revealed as someone rather significant..." 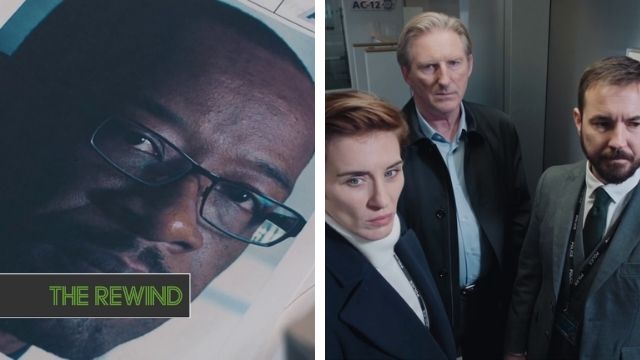