You can always rely on Liveline to produce some entertaining discussion of a weekday afternoon. On Thursday the discussion on Liveline - like most things in our lives at the moment - revolved around the EUROs, with one caller suggesting she found it hard as an English woman living in Ireland to express her support for England.

The discussion came in the aftermath of England's 2-1 win over Denmark in the EURO 2020 semi-final, which saw them through to their first major final in 55 years.

England native Louise Hassan rang in to Liveline to give her perspective on watching the game in Ireland last night, and she had particularly critical words for RTÉ's coverage.

I've lived here 20 years and supported every Irish team that plays, but none of my friends wanted England to win last night. I woke up to Twitter this morning and it was just sad, really.

Even watching on RTÉ 2 - when I realised it wasn't on BBC I knew I was in for a really bad night, because I knew it was going to be so negative, and it was. "Raheem Sterling dived, the goalkeeper was bad, the team was generally rubbish." It was just so hard to watch such a brilliant match with such negative, 'we really don't want them to win' connotations.

The commentary after the match from RTÉ was just dire. I had to turn it off.

From an Irish perspective, RTÉ's coverage seemed fairly balanced, with Tony O'Donoghue even presenting the case for Irish fans to support England in the leadup to the game.

But it can't be denied that the criticism of some of the English players was strong, particularly of Jordan Pickford and Raheem Sterling. Whether or not that criticism was justified is another matter, but there were some strong negative opinions presented about England on RTÉ on Wednesday night.

Louise went on to say that she understood Irish people's reasons for disliking the English team, but still said she was disappointed that they couldn't get behind the England team.

One of the most striking things Louise said was that she wouldn't feel comfortable watching next Sunday's final wearing an England shirt in Ireland.

This Sunday, I'd love to go out with my England shirt on and my England flag on the balcony of where I live and really enjoy the day, and I just wouldn't. Couldn't.

I would definitely say 99 per cent of Irish people will be cheering Italy on on Sunday night.

The debate about England fans being made welcome in Ireland is a very different one to suggesting Irish fans should support England on Sunday. Of course all football fans should feel safe to support their own team, and perhaps we can do more to foster that kind of culture, but it's hard to see many Irish people swaying 180 degrees and cheering on England on Sunday.

The discussion about the England team went on for over an hour on Liveline on Thursday, with the discussion ranging as far as goalkeeper Jordan Pickford and as wide as the Great Famine. As you do.

We think, given the differing fortunes of the English and Irish teams at the minute, that England will survive without the support of Ireland fans on Sunday, even if one Liveline caller would beg to differ.

SEE ALSO: Kerrymen Supported Italy Because 'They Were A Bit Better Craic' 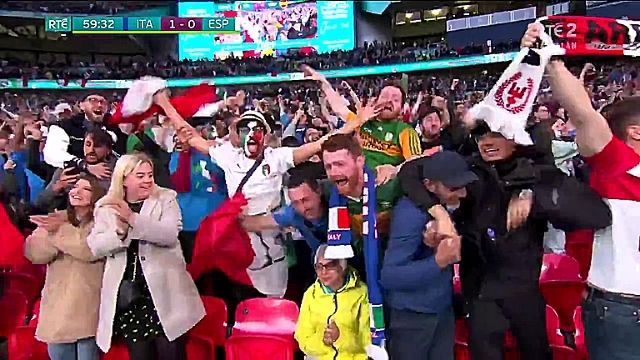