"And Sally O'Brien and the way she might look at you."

RTÉ's Reeling in the Years of the 2010s has given us a nostalgic trip down memory lane this year. A lot of us have been howling at the television, blurting out, "Jaysus, surely that wasn't seven years ago."

While we're looking at the past, we'll often see an old advertisement surface, and cringe our lives away. We'll laugh at how out of touch advertisers were, and how out of touch we were for thinking they were normal.

But there is that rare time that you gaze upon a gem. A piece of heritage. A true depiction of Irish history that I feel so strongly about, we need to gather up all the tapes of them and bury them in a safe under the Rock of Cashel.

That's of course - the old Irish TV adverts for Harp. My god. They really were a work of art. Here's a compilation of what appears to be two adverts in one, but it could well be one. Regardless it's all about the pint of harp:

So many questions arise from this masterpiece of 43 seconds of television. Who's he writing to? Where's the pub he's getting the thirst for? Did he use to tip about with Sally O'Brien? The questions that need answers, simply don't need to be answered.

One of the best lines from the advert is "you can fry an egg on the stones here if you had an egg." The thought of an egg frying on a pile of stones is such a laugh that even the fella writing the letter is 'cracking' himself up at the thoughts of it.

It goes from the memories, the songs, the dancing and the camaraderie to a note of dry humour and an almost spiritual like ending. He looks up at the sky, a light shines down on him. The patron saint of harp is paying him a visit.

Through a deep dive of the internet - we've discovered that the real Sally O'Brien is actually actress Vicki Michelle. She appeared in Emmerdale and Allo Allo! and comes from a place called 'Chigwell', as English sounding as a townland can be.

So on the surface of it - she's an English woman pretending to be a true Irish rose in Sally O'Brien. We don't care. For that TV placement in the advert alone, she should have her Irish passport, and change her name to Sally, permanently.

Through extensive research, we managed to uncover another TV advert for Harp. There are plenty on the Internet made for British television, but given the Irish bartender in this, we're going to pretend it's Irish too:

Some say this advertisement was the inspiration for the entire Terminator filmography. The orb has a bit of Irish tongue to him, saying "goodbye Barney, enjoy the craic." The orb would be good craic at a party, now.

Then a man-turned-robot finds himself requesting a pint of harp, but sticking out like a sore thumb in doing so. He's not from around here. The bartender spots it, and answers cheekily, "you're from the future, that's your time machine, and I'm Laurence of Arabia."

Someone jokingly butts in, "and pigs can fly", to which a pig does manage to fly in on an RC helicopter. We then see a rogue camel come out from the side of the bar asking for a pint and packet of dates. You couldn't make it up.

They were ahead of their time, masterful and equal parts confusing, but the harp adverts set out to achieve one goal. To give someone to urge to go sink the pint of harp.

See Also: QUIZ: How Well Do You Remember The Commitments? 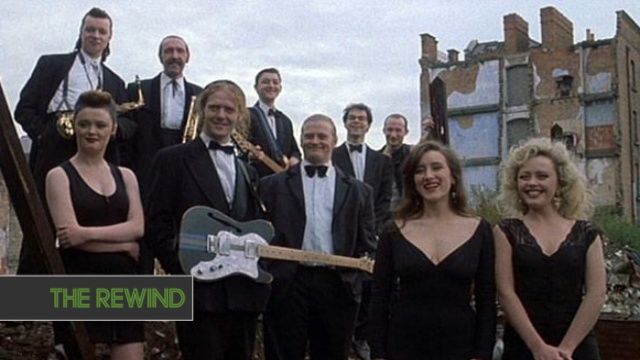