Your Guide To Watching The Super Bowl In Ireland

Super Bowl 56 take place this Sunday, 13th February and even if you don't watch the NFL every week, you will want to see this year's Super Bowl. There's a real David vs Goliath feel to this year's showpiece event for the NFL as the Cincinnati Bengals take on the Los Angeles Rams. This may be a first Super Bowl for many new NFL fans in Ireland so here's a guide to the Super Bowl, a breakdown of both teams and info on where or how to watch the game on the night.

If you want to cheer on the underdog there's no bigger underdog than the Cincinnati Bengals. They've been perennial losers for decades, routinely having one of the worst winning records in the league and rarely reaching the playoffs but their fortunes began to change this year thanks to Joe Burrow.

In just his second season in the NFL, Burrow starred as the Bengals won 10 games in the regular season to reach the playoffs for the first time since 2015. Their wildcard win against the Las Vegas Raiders was their first playoff win since 1991 and then in the following round against the Tennessee Titans, Burrow got sacked 9 times and still found a way to win. The Bengals then upset the favourites Kansas City Chiefs despite trailing 21-3 in overtime to reach their first Super Bowl since 1989.

If the Bengals win, it would be equivalent to Leicester City winning the Premier League. Before the season most pundits had them down to lose more games than win and not be anywhere near the playoffs, but all season they've proved the doubters wrong and could do it one more time this Sunday.

The team from Hollywood are full of blockbuster talent as you would expect it to be. They actually reached the Super Bowl recently in 2019 where Tom Brady's New England Patriots beat them 13-3. The Rams were a young team with a young coach back then but experience and the additions of stars like Odell Beckham Jr, Von Miller and quarterback Matthew Stafford have made the Rams favourites to win it all this time around.

The Rams had a slightly better record than the Bengals at 12 wins and 5 losses but they have one of the best offenses in the league. Cooper Kupp at wide receiver was an outside shout for MVP this year as he had the most touchdowns and the most yards made in the NFL in the regular season. They have an elite defence as well led by Aaron Donald, one of the best and strongest defensive linemen in NFL history and along with Miller and Jalen Ramsey, they have one of the toughest defensive units in the NFL. With a young, attacking-minded head coach in Sean McVay, the Rams have been one of the most exciting teams to watch all season and deservedly get a chance to win it all on Sunday.

The Super Bowl this year is actually taking place in the Rams' home at SoFi Stadium in Los Angeles. If they win they'll be the second consecutive team to win the Super Bowl in their own stadium after Tom Brady and the Tampa Bay Buccaneers did it last year.

How to watch the Super Bowl in Ireland?

The Super Bowl will be shown live on Sky Sports Main Event from 10pm on Sunday 13th February. Kickoff will be at 11:30pm and will run on until around 3:30am.

Where to watch the Super Bowl in Ireland

One great aspect of the Super Bowl every year is going out and watching the game with fellow fans. There's a few events going on around Dublin, including ones hosted by the Dublin Rebels American Football team and the UCD team, both on Harcourt St. and you can get tickets for them on Eventbrite. The Woolshed Pub on Parnell Street in Dublin and on Sheares Street in Cork should also be showing the game live as well.

In Belfast there's a couple of events on in the Botanic Inn and The Deer's Head, you can find tickets for either event on Eventbrite. 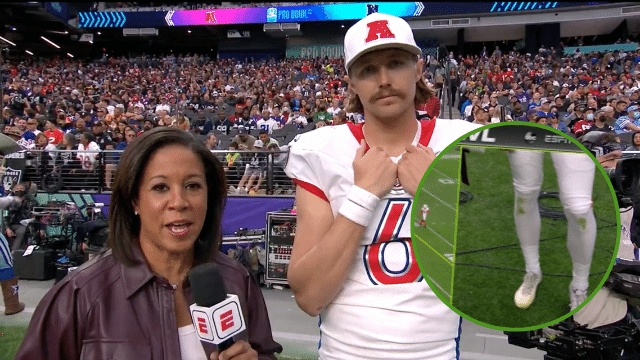