Former UFC bantamweight champion Holly Holm has admitted a potential clash with Katie Taylor would interest her to come back to boxing.

Before her career in MMA, Holm enjoyed huge success in boxing, with a 33-2-3 record, and champion in three weight divisions, while also entering the hall of fame this year.

Holly Holm’s achievements in boxing didn’t get the recognition they deserve, with women’s boxing not as popular back then as it is today.

Speaking on the MMA Hour with Ariel Halwani, ‘The Preachers Daughter’ still believes she would have switched to MMA if the sport was receiving the recognition is does today.

.@HollyHolm tells @arielhelwani if she returns to boxing, Katie Taylor is the fight she wants 👀

"It does intrigue me. A lot. To the point where, before, I was like I’ll never box again, and I’m not saying that [now].”

“I think I still would’ve. I came to MMA because I started to get really excited about MMA.

That’s where my passion was going. I really didn’t miss boxing.”

Earlier on the show, Eddie Hearn revealed that talks took place between Holm and Katie Taylor's management., while Bellator Featherweight champion Kris Cyborg was also discussed as a possibility.

"Holly Holm can box. There's no one really in boxing-you've got Chantelle Williams, she's going to be undisputed at some point. She's good but we've got to get her profile to the same level.

But how do you match the magnitude of Saturday? And I guess a Cyborg or Holly Holm can do that."

Speaking in the aftermath of Katie Taylor’s sensational victory over Amanda Serrano, arguably the biggest fight in women’s boxing history. Holm revealed she talked to Taylor about a possible clash between the pair.

“I always want to do something that hasn’t been done, I get super intrigued by stuff.

I want to go back in and show what I can do. I’m a lot bigger and stronger than the 135ers, and I still got a lot of that ring experience behind me.

If I was to go back to boxing, that would be the fight I would want.”

The 40-year-old is currently preparing to face Ketlen Vieira in a bantamweight clash on the 21st of May.

Holm was scheduled to face current champion Julianna Pena in May last year but had to pull out due to health issues. So a victory could put her in contention for a title shot. 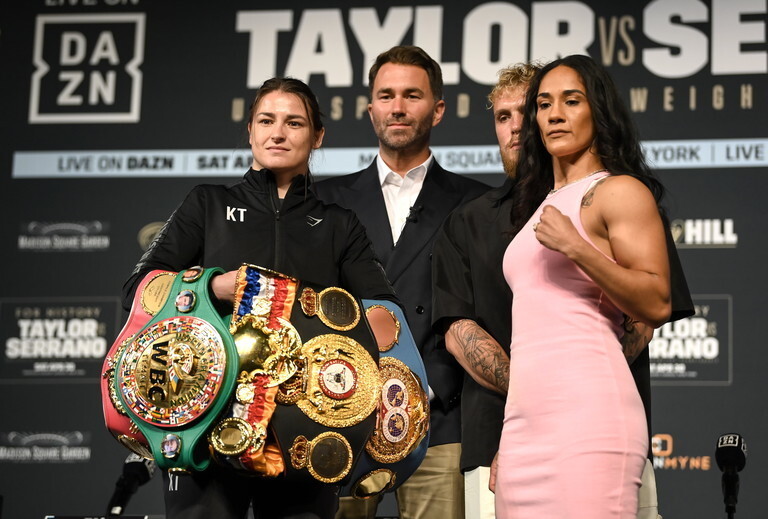 Boxing
4 years ago
By Maurice Brosnan
Watch: "Bring It On" - Katie Taylor Open To Holly Holm Crossover
Popular on Balls
Golf
1 day ago
By Gary Connaughton
Padraig Harrington Glad He Didn't Have To 'Make A Decision' On Saudi Golf League
Motorsport
1 day ago
By Gary Connaughton
Carlos Sainz Worried About How 2022 F1 Cars Will Affect Health Of Drivers
46