There is no doubt that Tyson Fury was fully deserving of his victory over Deontay Wilder in Las Vegas, but some are claiming that the result of the fight would have been reversed were it not for a controversial refereeing call.

Many Wilder fans are pointing out that Fury received an unusually long count from referee Russell Mora after the Brit was knocked down for the second time in the fourth round.

As the footage below shows, while the count may have been slightly long, it does not seem like enough to spark any sort of controversy.

I see a lot of chimping from Wilder fans about “muh slow count”. In the video you can clearly see that Fury was on his feet within 10 seconds from both knockdowns in the 4th round. :53-:44 and :16-:06.

However, some believe this was a clear mistake, including Joe Rogan.

Speaking on his podcast the Joe Rogan Experience, the UFC commentator said the only explanation for this decision was 'an error or corruption'.

The referee is supposed to go ‘One two…’ when the guy goes down. But if for any reason he has to interrupt the count… you’re supposed to pick up the count where the ringside counter has it.

So there’s a guy who’s counting ringside, and he’ll keep the count going. So if you’re at ‘One, two,’ and then you’re like ‘Go to a neutral corner,’ that guy is supposed to be like ‘three, four, five,’ but he didn’t.

He went back to it, ‘three, four,’ but the guy had already been down for a couple seconds. Without a doubt it was a long count. It's bullshit...

I think it’s an error, or corruption. Most likely an error, most likely the guy’s panicking...

There’s maybe one or two other humans that have ever lived that can punch as hard as [Wilder]. He’s without a doubt one of the hardest punchers of all time. He’s a murderous puncher, but the level of skill was so evident.

The difference is Tyson Fury is a masterful boxer, he’s masterful. His strategy was amazing. Just stay glued to Deontay, wear on him, hang on him, make him work, and just drag him deeper and deeper into these fucking horrible waters filled with crocodiles.

That’s what he did, and almost got knocked out doing it. That’s how dangerous Wilder is.

Wilder was unhappy in the aftermath of the bout, feeling that his opponent had bent the rules in his favour.

This is not the first time the American has made such claims, coming up with a number of conspiracy theories as to why he also lost in the second meeting back in 2020. 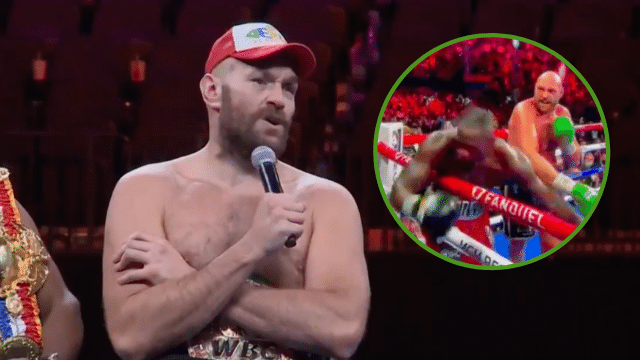 Boxing
1 month ago
By Gary Connaughton
Tyson Fury Reveals Heated Exchange With Wilder After Knockout Win
Boxing
1 month ago
By Jonathan Browne
How To Watch Fury Vs Wilder 3: What Time Is It? How Much?
Boxing
2 months ago
By Daniel Hussey
Tyson Fury Trolls Anthony Joshua By Offering To Train Him For Free To Beat Usyk
Previous Next

Boxing
1 month ago
By Gary Connaughton
Tyson Fury Reveals Heated Exchange With Wilder After Knockout Win
Boxing
1 month ago
By Jonathan Browne
How To Watch Fury Vs Wilder 3: What Time Is It? How Much?
Boxing
2 months ago
By Daniel Hussey
Tyson Fury Trolls Anthony Joshua By Offering To Train Him For Free To Beat Usyk
Popular on Balls
Football
7 hours ago
By Gary Connaughton
Sebastien Haller Breaks Remarkable Champions League Record Against Sporting
Football
1 day ago
By Jonathan Byrne
Ian Wright Heard Of Mother's Death During FA Cup Punditry Duties
Football
1 day ago
By Jonathan Byrne
How Leeds United Became Barcelona's Champions League Nightmare
GAA
18 hours ago
By PJ Browne
Thought Of Absent Brother Heightened Emotion In Graeme Mulcahy