Fight week trundles on and Ireland beams with pride - knowing we may have a unified world champion to claim as our own come Sunday morning.

Of course, Katie Taylor already has three world title belts, but Saturday’s bout has all belts on the line, which would make her the undisputed champion of the world. That affable Wicklow character only attracts us more to the modest fighter, but how popular is she outside these shores.

More to the point, how is she viewed within the boxing fraternity around the globe?

From various columns, reports and interviews, it would appear Taylor is just as well admired overseas as she is right across Ireland.

Laila Ali, the daughter of Muhammad Ali, was just one of the esteemed names to compliment the Irish boxer, commenting on Facebook: "Love me some Katie Taylor. That girl is something special." 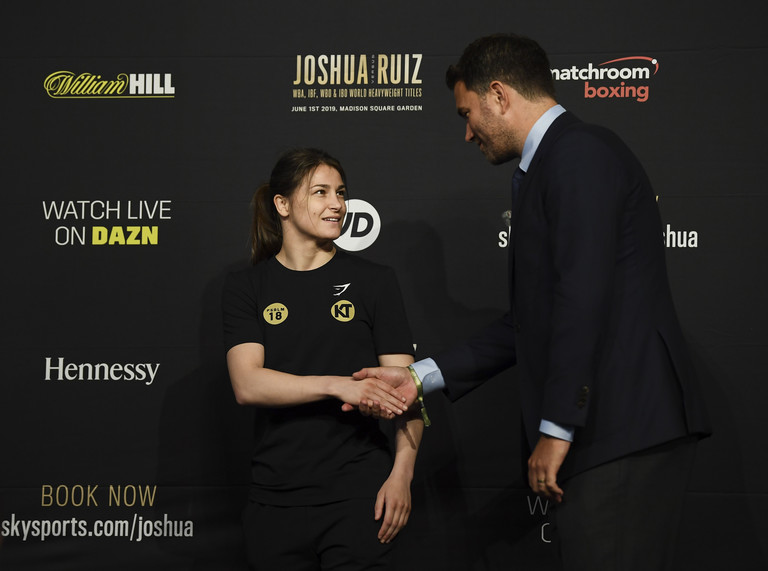 Similar sentiments were shared by many others, too.

Respected boxing journalist Gareth A Davies was just one writer in the sport, paying homage to the Bray woman ahead of this weekend’s event at Madison Square Garden.

In an interview with Taylor in the Telegraph, Davies wrote:

Boxing's real-life 'Million Dollar Baby' has an appeal to fans few others possess, softly spoken out of the ring; a fearsome fighter in it, with blurring hand speed launching relentless attacks.

Likewise, broadcaster and writer Steve Bunce also remarked on the achievements of the 32-year-old in his Independent column where he believes she will “alter the short history of error, hype, nastiness, prejudice and neglected skills in the world of women’s boxing.”

Taylor, make no mistake, stepped over the solid barrier of hate, denial, reluctance and old-fashioned sexism a long time ago and after one Olympic gold, five World amateur titles, six European titles and 13 fights unbeaten as a professional she has nothing to prove.

BBC commentator Mike Costello who has sat ringside for some of the biggest fights in recent years maintained Taylor’s match-up with Delfine Persoon “might just be the women's boxing match we have waited for.”

But it isn’t just journalists heaping praise on the Irish pugilist. In his TalkSport column, world heavyweight contender Dillain Whyte referred to the Taylor as “an inspiration and great for the sport of boxing.”

Ready to light up @TheGarden on @DAZN_USA and @SkySportsBoxing. pic.twitter.com/jcFWzd6x2P

In a sport where trash talk is so often the order of the day, the praise is significant.

Another boxer with praise for the Wicklow athlete was former world champion Paulie Malignaggi, who was appearing on the Sky Sports Boxing podcast, Toe 2 Toe.

She’s done well at the Olympics and continued that momentum into her boxing career, having not only some good wins but looking good doing it. She’s the kind of girl that you probably look forward to continue to watch her rise.

The Bray fighter, clearly, is very well liked. But that won't concern her much at this stage. Her eyes will be fixed firmly on the Madison Square Garden ring - as they have for a number of week's now.

Tomorrow night, the eyes of the world will be fixed on her.

Football
19 hours ago
By Gary Connaughton
Quiz: Name Every Nation Republic Of Ireland Has Played Against
17

The Rewind
23 hours ago
By Gary Connaughton
Watch: Doctor Brilliantly Slates Trump On Fox News And It Didn't Go Down Well