Revealed: FIFA 19 Soundtrack Announced And It Does Not Disappoint

Sure to be a few belters in here. The FIFA 19 official soundtrack has been announced, as the anticipation continues to build ahead of the game's official release on September 28th.

Down through the years the FIFA titles have featured some iconic tracks, and this year appears to be no different. Who could ever forget this tune on FIFA 1999?

Some of the names featured on this edition include Childish Gambino, Sia, Diplo, and The Gorillaz. There is sure to be something to suit everybody's taste, with a diverse range of acts originating from 16 different countries contributing to the final product.

While there are still some songs left to be announced, the soundtrack is currently available to stream on Spotify. You can do that here.

This year will also see the final edition of The Journey, with Alex Hunter set to continue his exploits under the watchful eye of the Real Madrid faithful.

No expense has been spared in providing the score for Hunter's time in Spain, with Academy Award-winning composer Hans Zimmer (The Lion King, The Dark Knight Trilogy) drafted in to bring a touch of drama to the proceedings. 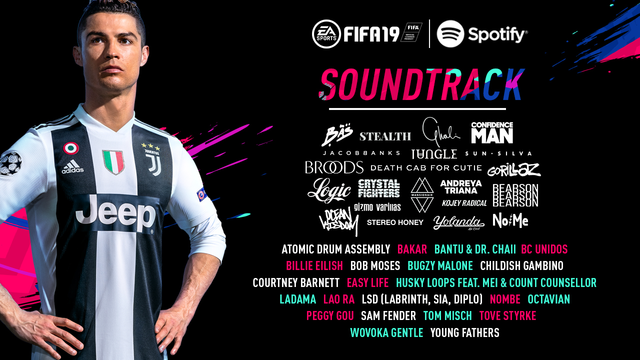 FIFA 19 is turning out to be one of the most eagerly anticipated versions in years, with a number of new features set to be unveiled.

With complaints over the past few years that the franchise had become too focused on online play, 'House Rules' is a welcome addition that will bring the rivalry back into your FIFA sessions with your mates. There are various modes such as 'survival', 'first to' and 'no rules'.

The Champions League and Europa league will also feature for the first time in this edition of the game, meaning you can now create your own famous European nights as you attempt to lead Barnsley to the promise land in career mode.

Other changes include dynamic tactics and timed finishing, both of which are likely to have a major impact on the feel of the game.