It may not have ended in the result they were hoping for, but Shamrock Rovers can certainly be proud of their performance tonight.

They matched AC Milan for much of their Europa League tie, with two moments of class from the opposition ultimately proving the difference.

Stephen Bradley's side created a number of opportunities of their own, with Aaron Greene being foiled by Gianluigi Donnarumma on three separate occasions. It was Milan's extra bit of class to take the chances presented to them that counted in the end.

Speaking to members of the media after the game, Shamrock Rovers midfielder Gary O'Neill said he was amazed by the quality of tonight's opposition at times.

We knew it would be an uphill battle tonight. We were just saying in the dressing room there that you can see the level of football. They're elite athletes. We just wanted to give a good account of ourselves and I think we done that...

You can see it in the final third when they really step up there levels, it's honestly like a different sport at times, the way they bounce the ball around. They're a really top side and really good to play against...

You can do as much homework as you want on them and I think we had our bases covered, but when you see them there is very little you can do about the two goals.

The first one Zlatan took one touch and then the second touch is a goal. The second one, [Calhanoglu] has curled it around three people into the top corner. You can't do much about that. 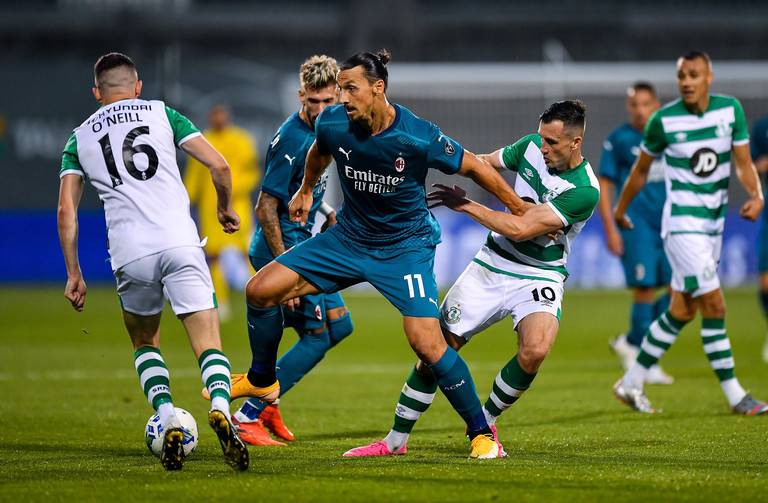 O'Neill gave an excellent account of himself in the Shamrock Rovers midfield, even if his opportunities on the ball were limited by Milan's ability to keep possession.

They stroked it around beautifully at times, while Zlatan Ibrahimovic was the ideal focal point up front, providing incredible movement and touches around the penalty area.

O'Neill said that the Swede certainly didn't play like a 38-year old, while also revealing that Aaron Greene was the one who managed to swap jerseys with the striker.

I think he was playing half-hearted, it was a stroll in the park for him there tonight. The lads in the back three were saying his strength, size, movement, holdup play, everything is the or three steps above what we are used to.

He was brilliant and is apparently a very nice fella as well. He's been at the top of his game since he is 18 or 19. To be 38 and still going that strong is a step above...

Aaron Greene was marking him from corners and he said to him on one of the corners 'my young lad is doing ballboy behind the goal, it would mean a lot to him to get the jersey'.

When the set-pieces were going up on the wall, who was marking Zlatan was the raffle ticket. Greener got the lucky one.

Rovers now face into a game against Waterford on Monday evening, hoping to keep their excellent form on the domestic scene going. 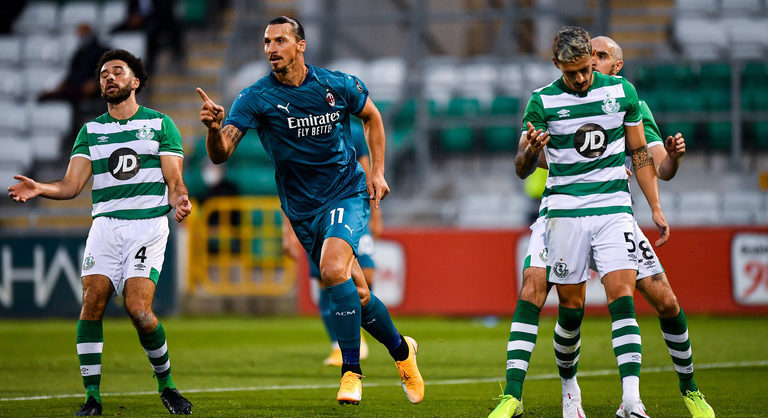 Football
2 months ago
By Gary Connaughton
Mario Mandzukic Makes Fantastic Gesture After AC Milan Injury Struggles
Football
4 months ago
By Sean Meehan
It's Been 10 Years Since Rino Gattuso And Joe Jordan Had Their Wonderful Scrap
Football
8 months ago
By Mark Farrelly
AC Milan Won A Completely Absurd Penalty Shootout Last Night
Popular on Balls
Football
19 hours ago
By Eoin Harrington
Sadlier And Duff Powerfully Put The Boot Into UEFA Over Rainbow Flag Stance
GAA
22 hours ago
By PJ Browne
'I Look At My Nephews - They've Bulked Up, They've Got Stronger'
Football
17 hours ago
By Eoin Harrington
A Mad Night At The Euros Turned Into A Very Good Evening For England
Football
17 hours ago
By Donny Mahoney
Leon Goretzka With Pointed Goal Celebration Right In Front Of Hungarian Supporters