Jack Charlton gave the people of Ireland no shortage of memories, but Italia 90 will always be the pinnacle.

Ireland reaching a World Cup quarter-final was a remarkable achievement at the time, and it may be even more so looking back now.

There are no shortage of incredible stories to come from that tournament, but the best of them may actually stem from Ireland's only defeat.

Ireland's audience with Pope John Paul II in the buildup to the quarter final against Rome is part of folklore at this stage, telling fellow goalkeeper Packie Bonner that he would be keeping a close eye on him in the game.

Unfortunately, a mistake from the Donegal man would play a massive part in the result, with Salvatore Schillaci turning home the only goal of the game after the goalkeeper had flapped at a shot.

This was never held against Bonner, but Jack couldn't resist the opportunity to rip the piss a little bit.

Speaking on History a few years ago, Andy Townsend said the words of the pope were still fresh in Jack's mind after the final whistle.

He wished us good luck for the game at the weekend against Italy, but not too much luck. He said 'which one is the goalkeeper'.

Pat [Bonner] put his hand up and said 'me', and he said 'I'll be keeping a special eye out for you, because when I was a young boy living in Poland I too was a goalkeeper'...

Jack came in and said 'thank you for all you've done, you couldn't have given me any more, I'm proud of each and every one of you, the country are so proud of what you've done'.

He turned to Packie said 'go on Packie, get in the shower'. He sort of trudged off to the shower, he's got a fag in his hand.

He looked at me and took a drag of his fag with a big smile on his face and he said 'Andy, the fucking pope would have saved that'.

He was never one to miss an opportunity. 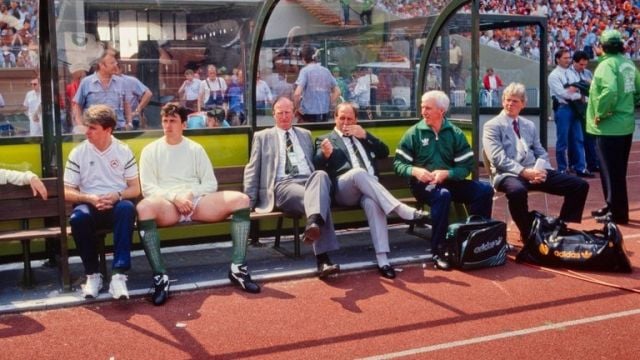 Football
7 months ago
By Michael McCarthy
The Player Ratings From Dreamland As Ireland Stuff Italy In Giants Stadium
Football
2 years ago
By Mark Farrelly
Andy Townsend's Wonderful Interview Detailing How Much Playing For Ireland Meant To Him
Football
3 years ago
By Gavin Cooney
Andy Townsend Calls For Change At The 'Top Of Irish Football'
Popular on Balls
Basketball
6 hours ago
By Eoin Harrington
Kieran Donaghy And Tralee Warriors Claim National Basketball Cup Title In Tallaght
Rugby
7 hours ago
By Colman Stanley
Michael Lowry Backs Up Farrell's Faith In Him With Superb Display For Ulster
Rugby
10 hours ago
By Colman Stanley
Jimmy O'Brien Announced His Arrival On The Biggest Stage This Afternoon
GAA
11 hours ago
By Eoin Harrington
Watch: Outrageous Score Helps Ardscoil Rís To Dr Harty Cup Victory