Every single football fan can recall the glorious moments on the pitch from Euro '88 and World Cups '90 and '94, but in the aftermath of Jack Charlton's sad passing, it's telling that every player that wore the green jersey under 'Big Jack' were instantly drawn to their memories of the man, not the matches.

Simply put, Charlton was loved by all and that feeling was replicated by the Irish supporters, as seen by the various tributes around the country.

While certain players didn't always agree with Charlton's tactics or enjoy an "overly-friendly" relationship with the manager - David O'Leary, Liam Brady, Roy Keane, and Ronnie Whelan spring to mind - it's telling that nobody had a single bad word to say about the World Cup winner.

However, the relationship between Charlton and Paul McGrath was more unique than most.

As McGrath said in his eulogy to Charlton: "Throughout his ten years as manager of our International team, Jack backed me as a footballer and as a person - he became a father figure to me. He gave me his full support when I needed it most and for which I am forever grateful. He has been a hugely important person in my life. He is a man I genuinely loved."

Given McGrath's well-publicised battles with alcoholism, Charlton took a softer approach when dealing with the Aston Villa icon.

Compassion, understanding, and patience were to be used.

In return for this leniency, McGrath repaid the Irish manager ten-fold with a string of breathtaking performances in the green jersey. 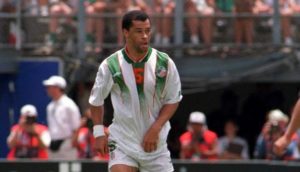 The former Manchester United and St. Patrick's Athletic man was recently inducted into the FAI Hall of Fame and speaking with the FAI, McGrath provided a beautiful anecdote about Charlton's decency as a manager and as a man.

I was just thinking about the many times I bumped into him when I wasn't so well. The Turkish game came flooding back.

He came up to my room afterward - we won 5-0 - and he sat me down at the end of my bed. I was sweating, all the drink was coming out of me.

He just sat down next to me at the end of the bed, patted my leg, and said 'I apologise.' He's apologising to me for walking out on him. He said 'I didn't realise how hard you had it.'

The whole interview is fascinating as McGrath reflects on his special bond with the Irish supporters, that magnificent performance against Italy at Giants Stadium, and much more.

Take a look below.

SEE ALL: Quiz: How Well Do You Know the Jack Charlton Golden Era?