The Ireland U21 Team That Stunned Italy In 2012: Where Are They Now?

It's fair to say that U21 is a level that Ireland have consistently failed to perform at. Never qualifying for a major tournament, the U21 national side was often treated as an afterthought in the past. While that may have only changed under Stephen Kenny, that doesn't necessarily mean we didn't have talented squads in the past.

The side from 2011-2012 is a prime example. A number of players from that squad now make up the backbone of the current senior team. Shane Duffy, John Egan, Matt Doherty, Robbie Brady, Conor Hourihane and Jeff Hendrick all played a part.

That campaign, which would unfortunately end up in a third place finish, also gave us perhaps our most famous victory at this level.

A victory over Italy is always special, especially away from home. That is something this team managed to achieve, beating the Italians 4-2 in Casarano.

The circumstances of the win make it all the more remarkable. For starters, a number of the names mentioned above did not feature. Brady, Hendrick, Duffy, and Hourihane played no part.

What's more, they would be reduced to ten men in only the 36th minute, a time when the game was finely poised at 1-1. What followed was a remarkable rallying performance. Ireland would go 4-1 up, being reduced to nine men late on before Italy scored a consolation in injury time.

As for the Irish side, the 11 players to play on that day have had vastly differing fortunes in the game during the intervening years.

McCarey played a huge part in this win. With the scores level at 1-1, he saved a penalty from Ciro Immobile to keep ten-man Ireland on level terms. He also made a number of other excellent saves to keep Italy at bay.

The Monaghan native was on the books at Wolves during this time, a club he would spend six years at from 2010-2016. However, the vast majority of that time was spend out on loan at clubs such as Walsall and York City.

The goalkeeper never really carved out a permanent place in English football. He moved to Dundalk in 2019 where he currently acts as cover for Gary Rogers.

While Matt Doherty's rise to the top would be somewhat delayed, there is no doubting his current standing in the game. He currently ranks as one of the best fullbacks in the Premier League after a stellar 18 months with Wolves in the English top flight.

That status has not quite translated to the Irish senior team as of yet, but you get the feeling that is set to change in the immediate future.

Egan was a Sunderland player during this period, but he would fail to make the grade at the Stadium of Light. He eventually moved to Gillingham in 2014, with his career being on an upward trajectory ever since.

Two year spells at Gillingham and Brentford would follow, before Sheffield United made the defender their record signing in 2018. He was a huge part in their promotion push that season, and has moved his game to another level since returning to the Premier League.

He only has eight Ireland caps at the moment, but he has already captained his country. Egan will play a key part for Ireland in the coming years.

The man to be sent off in the 36th minute of that game, Williams was born in Germany but raised in Waterford, joining Aston Villa in 2009. However, he only made one league appearance for the club. He joined Bristol City in 2013, and has since carved out a strong career in the Championship.

Moving to Blackburn Rovers for a fee of around only £225,ooo, he has proven to be a massive bargain. Williams has been limited by injuries at times, but has been a fixture in Ireland squads under Mick McCarthy. He netted his first senior international goal in the win against New Zealand late last year. 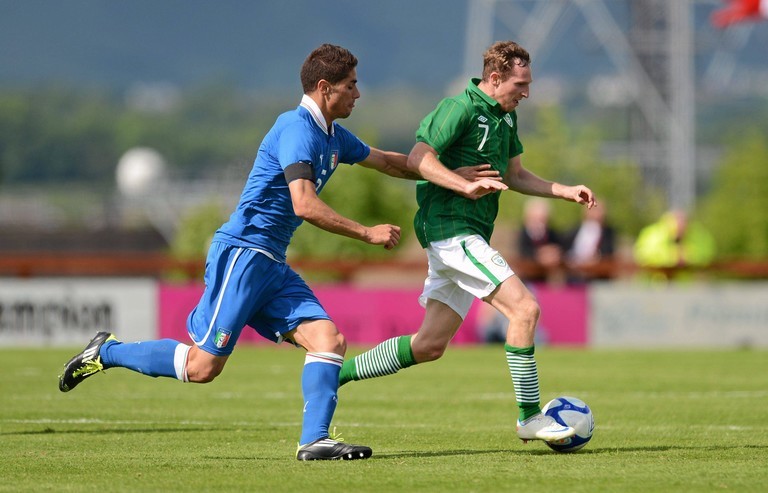 Captain on the day, Yorkshire-born White came through the ranks at Leeds United. Having lined out for England up to U19 level, he switched to Ireland at U21s.

The defender went on to make 85 league appearances for his boyhood club, spending time on loan at Oldham and Sheffield United. He departed for Rotherham in 2015, before moving to Barnsley on loan a few months later. He won promotion to the Championship with the club before making the move permanent.

However, his career would be derailed by injuries. He left Barnsley in 2017 and was forced to spend two years out of the game. He made his comeback this season with Hearts, but has been off out of international consideration for some time.

Another Wolves player at this time, Forde was only 19-years old for the win against Italy, getting sent off late on for two bookable offences. Making his Premier League debut against Chelsea at the age of 18 years & 10 days old in 2011, he remains the tenth youngest Irishman to debut in the competition.

He made five league appearances in Wolves' relegation campaign, but never pushed on from here. The Limerick man soon fell out of favour and would spend some time on loan at Scunthorpe before permanently leaving the club in 2014. He would go on to have successful stints at both Walsall and Rotherham, and joined Oxford United last summer. 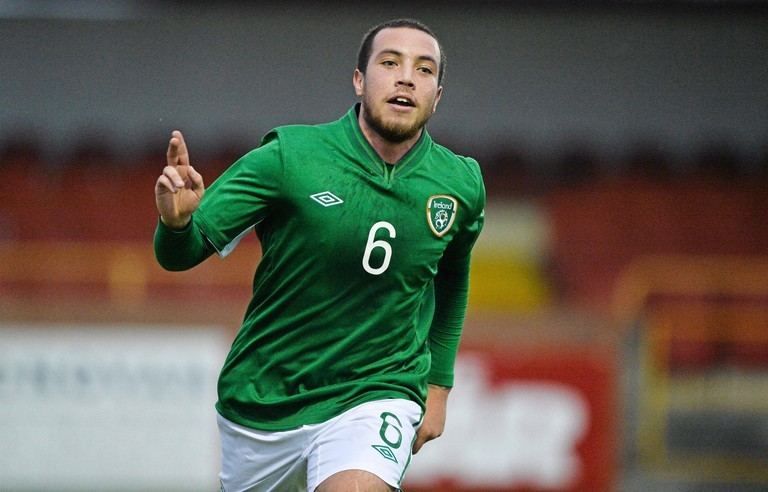 Much was expected of Samir Carruthers when he joined Aston Villa as a 16-year old in 2009. He eventually made a first team breakthrough in the 2011/12 season, making three Premier League appearances. Unfortunately, that was about as good as things got for him at Villa Park.

He was sent out on loan to MK Dons for the 2013/14 season, making the move a permanent one at the end of the season. He helped the team earn promotion to the Championship for the first time in 2016, going on to make 37 appearances the following season as they suffered immediate relegation back to League One.

Carruthers went on to spend a couple of seasons at Sheffield United, and currently finds himself at Cambridge United. At 26-years old, he has yet to make an impact at senior international level.

The scorer of Ireland's third on the day, Henderson's career has gone in an unexpected direction in the intervening years. English-born, he was an Arsenal player at the time, although he never made a first team appearance for the club.

He began to slowly move down the football pyramid, never really establishing himself at the likes of Crawley Town and Grimsby Town.

Then he upped and left for Bulgaria. He signed for second-tier club Pirin Blagoevgrad in 2017, where he finds himself at the moment after a brief foray to Dunărea Călărași in Romania.

One can't help but feel that Eunan O'Kane should have been destined for bigger things. He looked set to push his game onto the next level after starring for both Bournemouth and Leeds United in the middle of the decade, but injuries have robbed him of that chance.

He was a key part of the side that helped bring Bournemouth to the Premier League for the first time, playing 17 times during the following season.  While his time at Leeds showed plenty of promise, a number of different ailments meant he suffered continued setbacks. He has yet to really return from a double leg break suffered in 2018.

Speaking to Balls late last year, he said he can't help but think what might have been, especially on the international stage:

I spent three years in nearly every squad and only made seven appearances. There are other people who have been in a similar position to me. Waiting for that chance to come and now they are getting it.

He left Elland Road in January for Luton Town, but has yet to feature for the club. At 29-years old, there is still time for him to add to his seven Ireland caps. After a tough few years, it would be great to see him regain some form. 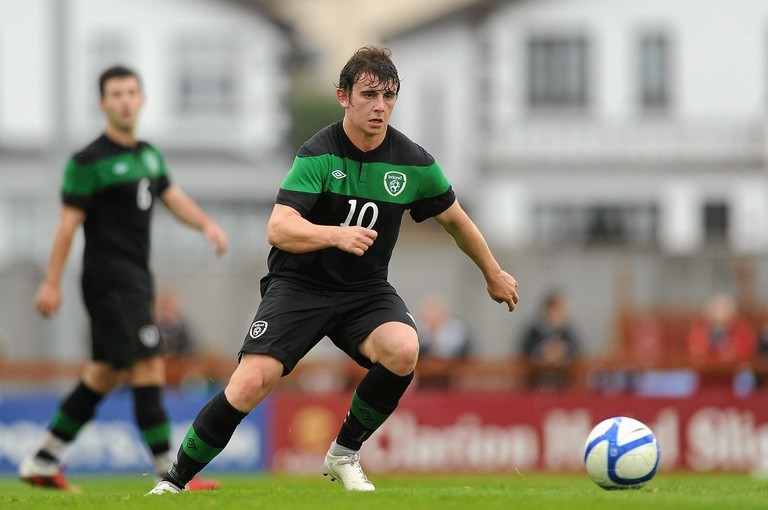 Doran scored his only two goals for the Ireland U21 side in this game, and what an occasion to get them on. A native of Charleville, the winger never established himself in English football after moving to Blackburn Rovers as a 16-year old.

He made three league appearances for the club, including a debut against Liverpool, spending time on loan at MK Dons, Leyton Orient, and Inverness Caledonian Thistle. It is north of the border where he would forge a career.

After joining Inverness permanently in 2011, he has made well over 200 appearances and won a Scottish Cup and Scottish Challenge Cup. With Inverness relegated in 2017, they will be hoping to earn promotion this season and currently sit second in the table.

Ireland's other goalscorer on the day, English-born Murray came through the ranks at Watford, for whom he would make 75 league appearances between 2011-2016. Spells at both Swindon and Colchester would follow, before Murray spent a year in Denmark with Vejle BK.

He joined Dundalk in 2019, making 25 appearances as Dundalk won the league title. He remains at Oriel Park for the 2020 campaign.

SEE ALSO: Quiz: Name The 50 Irishmen With The Most Premier League Appearances

Football
3 weeks ago
By Sean Meehan
Ireland U21s Will Face Italy And Sweden Again In Qualifying For 2023 Euros
Football
3 months ago
By Gary Connaughton
Ireland U21s Victims Of Their Own Success After Ruing Absence Of Star Players
Football
3 months ago
By Gary Connaughton
Ireland Player Ratings As Iceland Defeat Leaves Qualification Hopes In Tatters
Popular on Balls
GAA
20 hours ago
By PJ Browne
'I Have Pictures Of Stephen Cluxton All Around My House, It’s A Bit Weird!'
Rugby
21 hours ago
By Balls Team
Son Of Offaly Hurling Legend Set For Super Rugby Debut
The Rewind
19 hours ago
By Sean Meehan
Introducing The Vote For Ireland's Greatest Singalong Song
Rugby
16 hours ago
By Eoin Harrington
Rob Kearney Player Mic Gives Great Insight On Western Force Debut