One of the unexpected delights of Euro 2020 has been the use of VAR as a force of good. We've seen how video replay has enhanced the credibility and enhanced the viewing experience of American football and basketball. We hoped it might be same for football.

Sadly, since arriving in the Premier League in the 2019-20 season, VAR has been an unmitigated disaster for people who play in the Premier League, and for those who watch it.. The lines, the super-duper-slo-mo replays, the dodgy handball decisions, the presence of Peter Walton during live television broadcasts: these are things none of us want to see.

The first week of the Euros has proven to people who exclusively watch English football that video replay is not an evil, in and of itself. Far from it! Instead it turns out it's the pedantic and pernickity employment of VAR by Premier League referees that is threatening to kill the game.

The Premier Leagues use of VAR has made me doubt it. Watching this tournament makes me realise we’ve overcomplicated it , mis-used it and thought we knew better than tournaments and countries that had used it before us . Used correctly It can work and not intrude on the game !

This is, of course, something that football supporters in other countries already know.

France might have been unlucky to have two goals disallowed by VAR in the second half last night but the decisions were ultimately highly difficult to make by the naked eye, reviewed in a sensible amount of time and ultimately, the proper ruling was made.

We've seen VAR at its most tolerable at the Euros. Compare that to how English referees have opted to employ VAR in the English top flight.

To work, VAR also needs competent and engaged studio directors who won't let the broadcast become mired in endless, looping slow-motion replays as VAR does its thing. UEFA' s directors got the Christian Eriksen incident very wrong, but they have been very good with its employment for viewers.

One area where VAR isn't used enough - but should be! - relates to on-field discipline. There didn't seem to be a VAR check on the Rudiger nibble of Pogba last night. On Monday on RTÉ, Damien Duff was critical of VAR's role - or lack thereof - in the Gregorz Krychowiak sending off against Slovakia, as the Polish player was given a very harsh second yellow.

That's where people who play football understand. That is never a yellow card in anybody's life. Just a little body check...the first one, definitely...it's gone to a red.

That's where VAR for me - and the ref's decision with his naked eye - has to be so much better. It's influenced the way the game has gone. Three points at stake, European Championships, it's ridiculous.

So is VAR perfect? No. But, it can be constantly improved. A Pandora's box has been opened and we can never go back to football without video replay. However, the Euros have proven that less is more when it comes to VAR. We've been promised thicker lines next season. We can only hope they're watching at Premier League HQ.

SEE ALSO: Watch: Ronaldo Breaks More Records And Has Very Much Still Got It 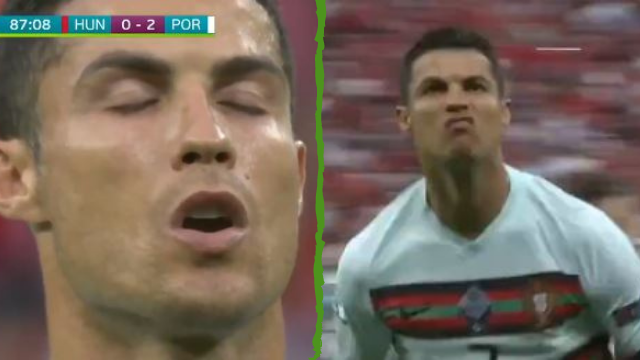 Football
6 days ago
By Jonathan Byrne
90 Arrests Made By Police For England Fan Behaviour At Euro 2020
Football
3 weeks ago
By Conor Breslin
Bonucci Says Declan Rice Comments Gave Italy Extra Inspiration
Football
2 months ago
By Eoin Harrington
How To Get ITV In Ireland For Live Sport Coverage
Popular on Balls
GAA
22 hours ago
By Donny Mahoney
RATIFIED: Henry Shefflin Will Be Next Galway Hurling Manager
94