How Injury Nightmare Made Brian Hurley A Better Person

After years of injury woes, Brian Hurley's career finally got back on track in 2019.

The Cork footballer suffered devastating hamstring injuries in 2016 and 2017, both times ripping the muscle from the bone.

"It's like starting my career again, to be honest," said Hurley at the unveiling of UPMC at the official healthcare partner of the GAA/GPA.

"I thought it was all over. Yeah, it's small things, though, you know? I was around the panel, but you didn't really feel a part of it because I kept my distance on the WhatsApps; I was travelling to some games with them but I wasn't really there.

"In your own head you're saying, fuck it, I'm not there, like. So just to have the craic in the dressing-room, the banter around the lads, and you feel that you're training harder. And training with them you can scut them more and have that craic, and that's what it's all about.

"If you're physically okay you'll train and get through all that side of it. It's just that you missed all the small parts of it around the dressing-room and just having the craic with the lads really."

After suffering the injury for the second time in the spring of 2017, Hurley was told he wouldn't play again at inter-county level. Only 25 at the time, it was a conclusion he was unwilling to accept.

Hurley's first experience of the injury had been rushed. He'd done little to no research regarding the surgery and who was doing it. That was a mistake, one he wasn't going to make the second time around.

After seeking advice from sports stars who had been in his situation before, he travelled to meet surgeon Fares Haddad in London. A week later, he went under the knife. 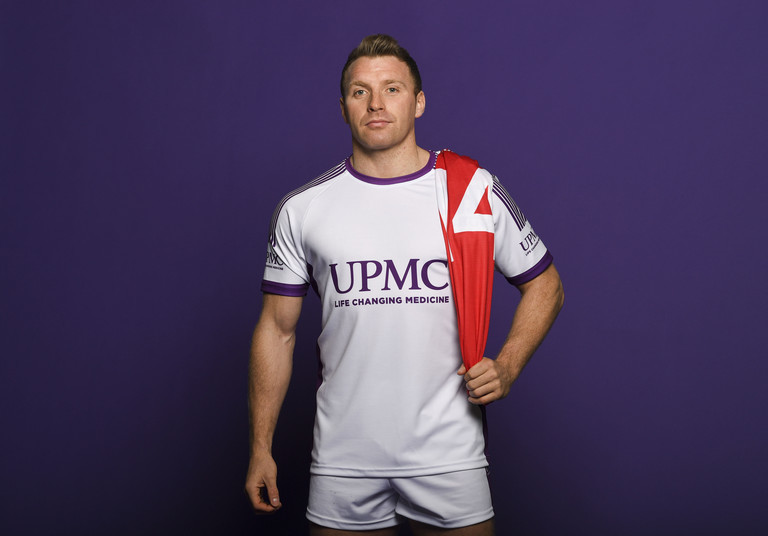 Cork footballer Brian Hurley at the announcement of UPMC as Official Healthcare Partner to the GAA/GPA at Croke Park in Dublin. Photo by Harry Murphy/Sportsfile

"It was definitely challenging," said Hurley.

"You're going to have dark days; you thought you were coming back, you had all the work done and it's gone from you - it's taken away from you, you have to do it all again and it might not work.

"It matured me up big time, making decisions. It made me a better person, definitely. You definitely get stronger from those things.

"I went through a fair bit that year so I was mentally strong. It was tough but I had good people around me, good positive people. You know, you do something wrong the first time, you learn from it."

These days, Hurley runs up the stairs. He's not sure quite why - he had not done so prior to recovery - but it's probably just because he can. The 27-year-old has come out the other end of his injury nightmare grateful for those around him and that he can still play at inter-county level.

"It just opened up my eyes," he said.

"Without getting too depressed about it, I met a lot of people in worse situations, wheelchair, leg losses; you look at me and it's only temporary. I said, 'This is only a small thing'.

"I just looked at it that way, kept doing it that way and just built a very good support team around me. It was always positive, no matter if I was having a shit day or whatever it was, they always put me back on track.

"People that are around you, when you're in that Cork football bubble, everyone wants a piece of you. It's when you get injured, go away down the back, they forget about you and stuff. You realise how good the people around you really are, when you're in a brace at 90 degrees with one leg, you can't get off the couch on your own, you can't put on your own socks.

"Jesus, I had club fellas dropping ice to the door, trying to get swelling down.

"When I went home, I was mad to brush my teeth - don't ask me why. I was inside in hospital for two days and brushed my teeth, I went to put my head underneath the tap but I couldn't, I was caught, my leg was in a brace and was catching me. I was shocked.

"Getting out of bed was a nightmare. I'm not being all sad, I'm just being straight up with you, we don't know how lucky we are."

UPMC, which offers trusted, high-quality health services at UPMC Whitfield Hospital in Waterford and other facilities in Ireland, will work with the GAA/GPA to promote the health of Gaelic Players and the communities in which they play.

GAA
20 hours ago
By PJ Browne
'I Made A Decision To Get Fit, Lose Weight And Push On To Being An Outfield Player'
1