Irish Olympian Fionnula McCormack has criticised World Athletics' decision to allow the Nike Vaporfly shoe to be worn by runners at this year's Olympics.

On Friday, athletics' governing body announced that shoes with a sole thicker than 40mm and with more than one plate will be prohibited from use at the elite level of the sport. That means the Vaporfly has the seal of approval to be worn by marathon runners at the Olympic Games in Toyko but Nike's next generation Alphafly does not.

It was also announced that from April 30th, any shoes used in competition need to have been available on the retail market for at least four months.

"The whole thing disappoints me," McCormack said on Tuesday as she was unveiled as a KIA Race Series ambassador.

I’m not a fan of the shoes. I feel World Athletics have let us down in the last week. I feel they were weak and it makes me sad. To me that’s not what the sport is about.

It definitely seems to be playing up to the one brand, and set out as ‘we have this and everyone else can play catch up if they want’. It just doesn’t look fair to me.

I feel like I’m the only one that really feels like that. No athletes seem to feel the way I feel about it.

I don’t feel your shoes should be giving you an advantage. The rule says ‘unfair advantage or assistance’ and they have been proven to be giving assistance. I don’t know if ‘unfair’ comes before both advantage and assistance or just advantage.

At the Chicago Marathon in October, McCormack finished fifth, running 2:26.47. It was an Olympic qualifying time and the second fastest ever marathon by an Irish woman. Just Catriona McKiernan's national record is quicker.

The 35-year-old did so in her regular New Balance shoes. Some non-Nike sponsored athletes have worn the Vaporfly by spray painting over the logo to negate possible anger from their sponsors but that is not an option McCormack is considering.

She is a New Balance athlete and the manufacturer does have a shoe which is pitched as a rival to the Vaporfly but the Wicklow runner does not know if she will wear it. Ultimately, she wishes that World Athletics had been stronger and not put her in this dilemma.

The range of Nike shoes has aided the sport's top athletes in setting remarkable new standards. As McCormack finished fifth in Chicago, Kenya's Brigid Kosgei - wearing the Vaporfly Next% - smashed Paula Radcliffe's world record by an incredible 81 seconds. Radcliffe's record had stood for 16 years and was viewed as being near untouchable. 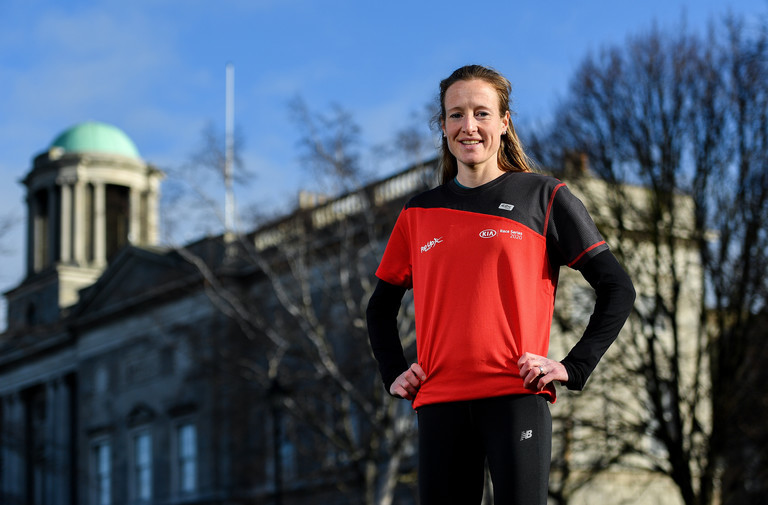 Olympian Fionnuala McCormack was today announced as ambassador for the 2020 KIA Race Series. Now in its third year, the series is organised by Pop Up Races and includes seven races nationwide. Photo by Sam Barnes/Sportsfile

"I haven’t worn a shoe with a plate or foam in it, I’ve always been minimalist," said McCormack.

"I was lucky coming back last year that I didn’t have to make a decision on shoes, I just wore what I always wore.

"I’m not sure they can tell you have to wear a shoe. I think it’s probably your own disadvantage not wearing it, maybe. I don’t know if they would do it.

"I’d prefer not to [wear it in Tokyo]. It’s only been a few days [since World Athletics decision] and I’ve thought about it a lot, but I don’t know if I’m putting myself at too much of a disadvantage to not, I don’t know.

"Maybe it is technological advancement but even for me, how do I compare myself with myself after this? If I wore a shoe, would I have a PB before and after? Do I run a PB and believe it's me?

"It would have been so much easier for me if they'd banned the whole lot. I wouldn't be in a position where I'd ever have to make a choice.

"Other people had the shoe in the last Olympics. It's the same as standing on the start line knowing that there are people who are drug cheats beside you. You don't look at them and you don't think about it, you run your own race and you run the best you can.

"It won't affect me in that way if I'm not wearing shoes that other people are wearing. That's the way it always is."

Fuel
4 days ago
By Maurice Brosnan
Five Powerful Finishers To Take Your Workout To The Next Level
Fuel
5 days ago
By Balls Team
Watch: The Very First Spinning Video
Fuel
5 days ago
By Balls Team
The Power Of Raw Hamburger Shakes And Other Diet Tips From Bruce Lee
Popular on Balls
Football
18 hours ago
By Donny Mahoney
Jim White's Sky Sports Send-Off Got A Bit Emotional
Football
12 hours ago
By Eoin Harrington
Christian Eriksen's Collapse Shows How Important CPR Is In Sport
Football
13 hours ago
By Donny Mahoney
Denmark And Finland Supporters Joined In Incredibly Moving Christian Eriksen Chant
54