The Best Mayo XV Of The Television Era

We've picked the best Dublin team of the TV era, and the best Kerry team. Appropriately, it's Mayo today. While we've called it the TV era, nearly all the players are drawn from 1989 and after.

Mayo never played live on television in the 1970s, having never got out of Connacht in that horrible decade. Galway were still fairly dominant in the first half of the 1980s though Mayo did win the Nestor Cup in 1981 and 1985. Most attention has been directed at the post-1989 era.

The team was picked with the help of our Mayo consultant, Joe Coffey of Team 33. Any complaints, direct them his way. (Full disclosure: we should point out we have defied his advice in the full-forward line). 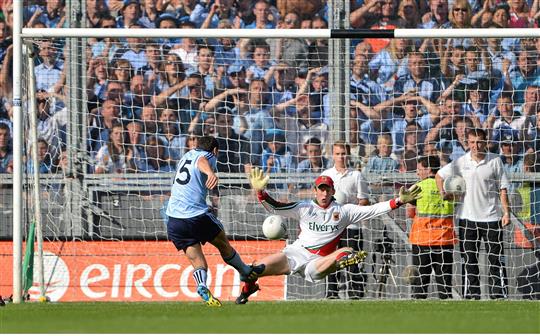 We've gone for Clarke on the basis of shot-stopping ability. Rescued Mayo late in the 2012 All-Ireland semi-final against Dublin, when it looked like they were on the verge of surrendering a once unassailable lead.

Sunday will be his fourth All-Ireland final appearance. 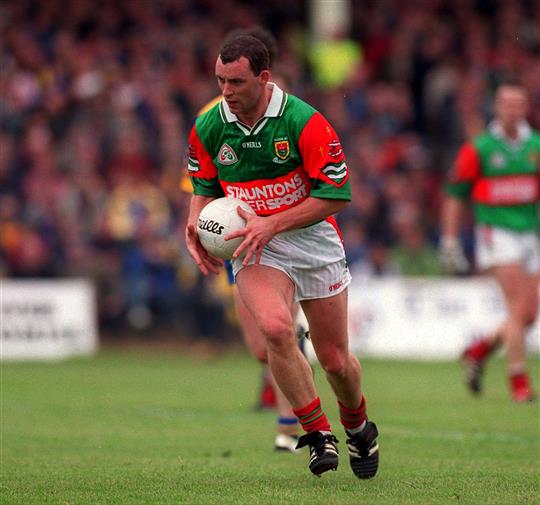 Tidy corner back during the John Maughan years and two-time All-Star in 1996 and 1997. He was a straightforward pick but we found it very tough to leave Dermot Flanagan out of the team. 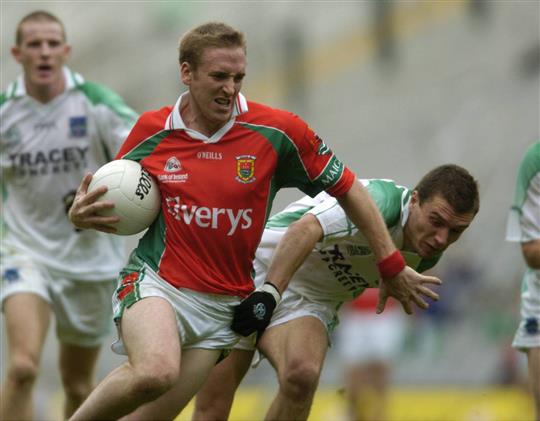 Perceived as a problem position for Mayo for a long time now. Ger Cafferkey is the only Mayo No. 3 to win an All-Star in 2012.

Neither Cahill nor Heaney won an All-Star. It was hard to separate the trio but our Mayo adviser urged us to go for Heaney. 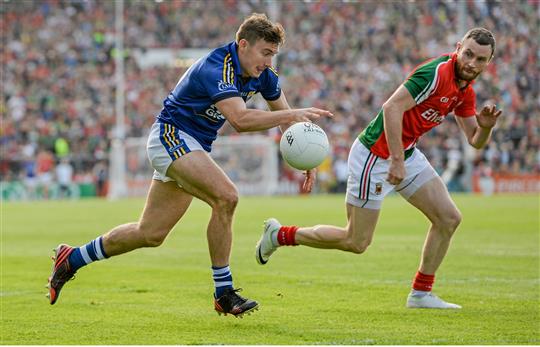 Again Dermot Flanagan could have been selected here and those nostalgic for the 80s and 90s might have rathered him. Keith Higgins has won universal acclaim as one of the outstanding corner backs of the last decade.

As Kieran Shannon wrote a week after the controversial 2014 loss in the Gaelic Grounds.

Even three years ago Keith Higgins was still a bit casual with his talent; now he is a killer, the supreme defender in the country and a certain All Star for a third straight year.

If Mayo shake the curse on Sunday, he will be among the favourites for Footballer of the Year. 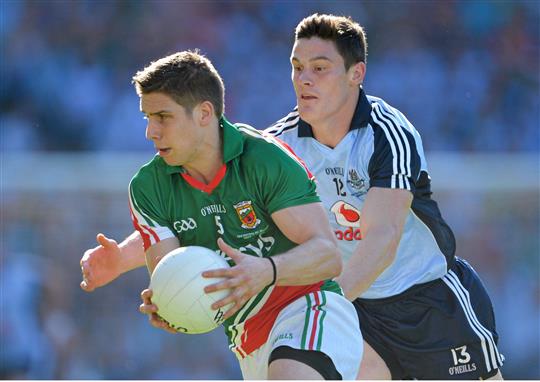 Pat Holmes was the right-wing back for much of the Maughan years and won an All-Star in '96. Ultimately beaten by Keegan (who voted to retain both Holmes and Connolly in the heave).

Mayo's current No. 5 is one of the most influential players in the modern game. Tigerish and occasionally cynical in his defending - something he's fairly upfront about - he is terrific going forward.

Often decorates games with a couple of points while still giving up nothing on the defensive side. 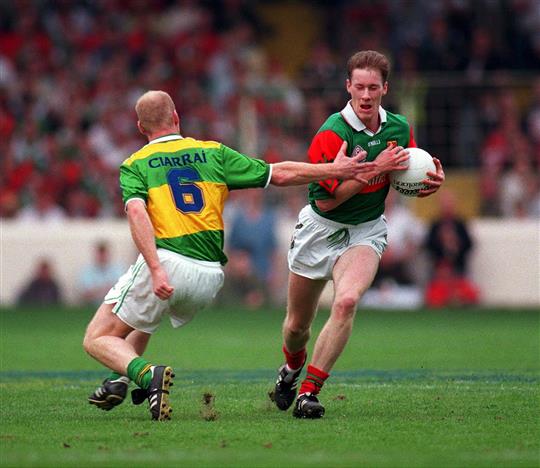 Donal Vaughan is possibly unlucky to miss out but Nallen played about seven thousand games for Mayo in the nineties and noughties, playing in four All-Ireland finals + a replay. 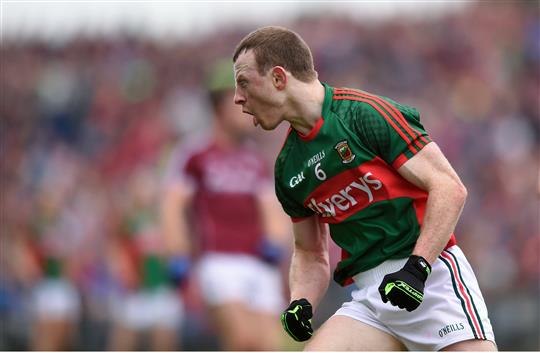 As Shannon noted, Boyle was in the Mayo wilderness before the arrival of James Horan. Today, he is one of the "the most honest and bravest football warrior(s) in the country".

Noel Connelly was captain in '96 and '97 and could have nipped in ahead of him. Touch and go. 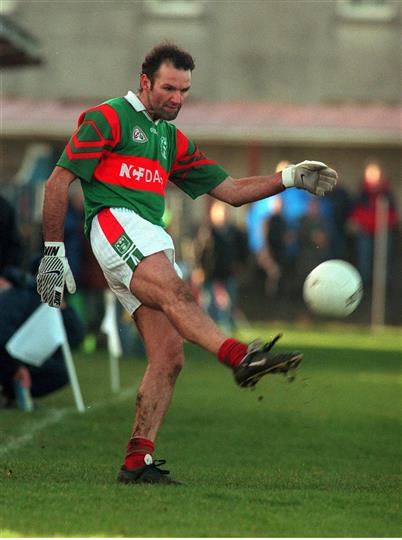 Automatic selection and the Man of the Match from the 1996 drawn final. Had the classic basketball players vision, hands and awareness of space. Incredibly charismatic figure back in the 90s, he played in three All-Ireland finals between '89 and '97.

A romantic figure from Mayo's first trek to the All-Ireland in 1989. Scored their first point in that final too, settling the team after a horrible start.

Wore a nappy of his head in the semi-final against Tyrone. Apparently, this was later auctioned off. John O'Mahony noted that there were more of them auctioned that were on his head. 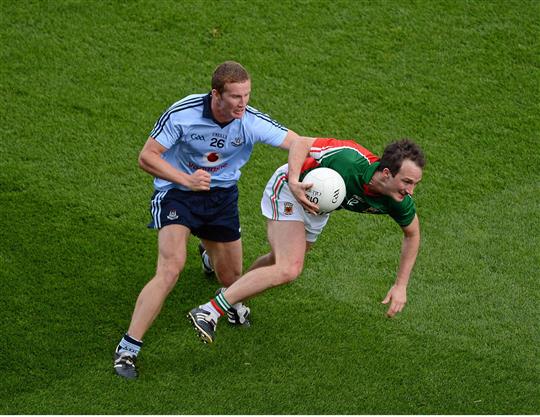 The last position on the pitch to be picked. We toyed with selecting James Horan, a two-time All-Star in 1996 and 1999 who was always good for chipping in with a few points from play. Our Mayo consultant directed us to give the nod to Alan Dillon. 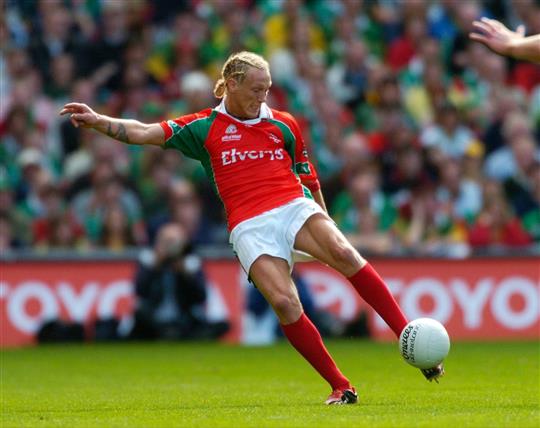 There would have been furious protests had we left him out of the team. When we ran a poll to find the greatest Mayo player of the last quarter of a century, McDonald won a landslide.

A much-romanticised figure, he never spoke to the media until the Second Captains crew came along (they were still with Off the Ball when they interviewed him first).

McDonald played and lost three All-Ireland finals, all to Kerry between 1997 and 2006. Though he made his Mayo debut in 1994, he was absent for the 96 season.

Biggest rivals for the position were Aidan O'Shea, who we've moved elsewhere, and Colm McMenamin, the industrious but non-prolific centre forward in the early Maughan years. 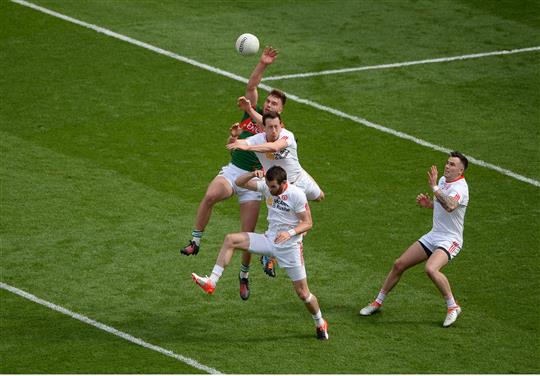 The only question with O'Shea was where we were going to put him. Originally, we pencilled him in for midfield but decided we wanted McHale and Padden lining up there.

We then pondered dropping him in at No. 11 but we couldn't stomach moving Ciaran McDonald from the 40. Ultimately, he'll be wearing 12 but we envision him functioning as a kind of third midfielder. 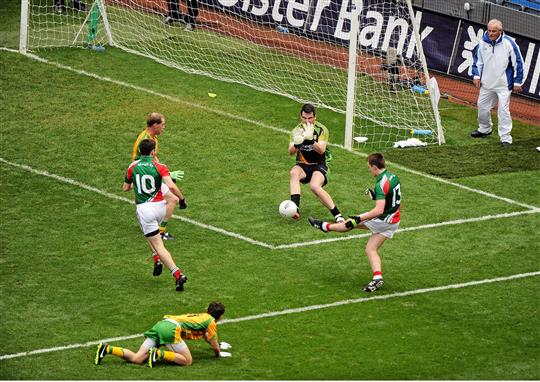 The GAA cliche of our times - 'marquee forward' - has often been used in debates about O'Connor. The question up for discussion is whether he is one.

The brilliant Kevin McStay was considered here. Injury ended up cutting his career short not long after the 1989 final. 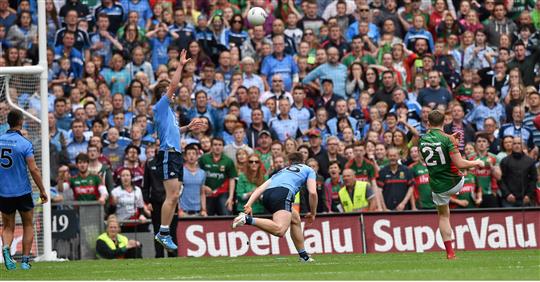 Could be deployed anywhere in the full-forward line really. Earned an All-Star in 2011 at full-forward. Mayo have frequently used converted midfielder at full-forward. Aidan O'Shea spends enough of his time there now (too much for his liking probably) and Liam McHale was switched to No. 14 for the 1997 campaign. 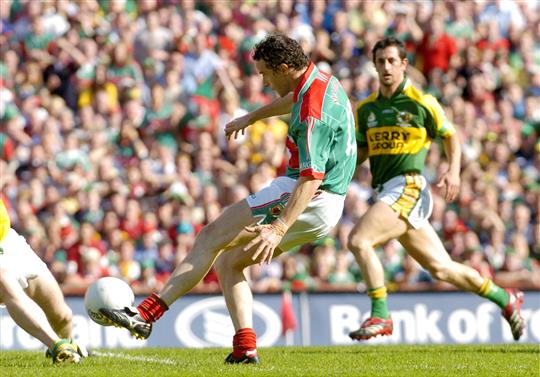 We have flown in the face of our expert advice from Mayo and left Conor Mortimer out of the team. He implored us to think of the 2006 Connacht final when Mort kicked a wonderful free to win the game, his early point blitz in the semi-final.

But we decided it was too much of a wrench leaving Kevin O'Neill off the team, Mayo's sole All-Star from the ultimately depressing 1993 campaign. Nearly ruined by injuries, he was back in the team for the 2006 campaign in which he played magnificently.

Goal-getter supreme in the 90s, Mr. Ray Dempsey, wasn't forgotten about either but lost out to O'Neill.

GAA
2 days ago
By Eoin Harrington
When Is The 2021 All-Ireland Football Final?
Podcasts
1 year ago
By Michael McCarthy
Three Man Weave - Best Team Of All Time, All-Star Debate, A Rainy 3-In-A-Row
116