The Cuala forward powered to four points from play as the Kerry defence struggled to contain him as they had managed to do in the drawn game a fortnight earlier.

O'Callaghan's physical development over the last three years has been eye-catching. Man-marking him has become one of the toughest gigs in Gaelic football.

"Yeah I suppose I've been getting stronger every year but it's only maybe a kilo or two difference in my weight since last year so I put on a little bit," said O'Callaghan as he collected PwC GAA/GPA August Player of the Month award on Thursday.

"This year was the first year I had a league campaign with Dublin because we were knocked out with Cuala so I kind of had a bit more time to work on all aspects of my game.

"Jim (Gavin) was obviously a part of that but it wasn't my intention [to put on extra weight]."

After spending the middle two seasons of his Dublin senior career mostly on the half-forward line, O'Callaghan's positioning has been further forward in 2019, better exploiting the first thought which enters his mind when the ball comes into his possession: go for goal.

"Previously in my career at underage I would've been in the full-forward line on edge of the square then in 2017 I started playing centre-forward for Dublin and I was there in 2018 as well.

"I was switching inside and out with Ciaran (Kilkenny) but this year myself and (Paul) Mannion stayed higher up the pitch. It's going back to what I used to do which is get the ball closer to goal.

"When you go for a goal a point will probably pop up anyway. That's what I was told from a young age. Get your man and go straight for the goal, something will happen for the most part." 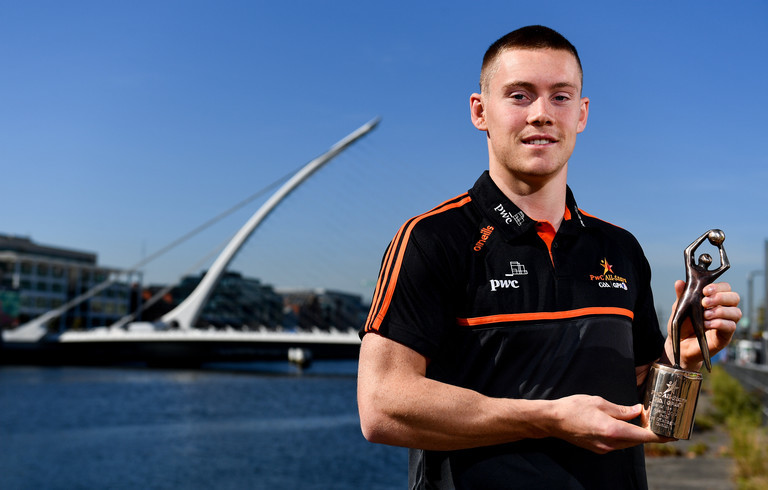 PwC GAA/GPA Player of the Month for August, footballer Con O’Callaghan of Dublin, pictured was at the PwC offices in Dublin to pick up his award. Photo by Sam Barnes/Sportsfile

O'Callaghan took to the field at the start the Leinster championship against Louth looking as though he had just emerged from an army training camp - military buzzcut included. Others in the Dublin team have since followed.

It was in May or something. I was just finished my exams for college, all my mates were going to America so I had to do something.

I let my brother get a razor out and shave my head. It was absolutely in bits. He did his best job - actually my two brothers did their best job at ruining my hair and then I went to the barbers and got it chopped so yeah I kept it going.

(Paul) Mannion followed me and then Smally, Paddy Small is the latest addition, he got it done the other day so, yeah, there's a couple of us.

His haircut might be more minimal than when he started out with Dublin but his mindset about his role within the team is not. He's now a more vocal presence in the dressing room.

"If a team is going to be successful, you kind of have to blood young lads and trust that they will grow into that leadership role. It’s a natural thing that has happened the last couple of years.

"With young lads coming through - Peadar Ó Cofaigh has been flying, Brian Howard is a big leader and Murch has been there before but there is a big, strong presence from the young lads as well.

"In 2017, you come in kind of with stars in your eyes. You know, looking at Diarmuid Connolly Bernard Brogan - these lads who you’ve been watching for 10 years.

"You kind of have to get out of that mindset as soon as you make the team - you can’t be a fan playing on the team. I had to get away from that anyway, trust yourself with what you have."

Con O'Callaghan: 'Nine Of Us From The Team Had A Weekend In Berlin Booked - A Music Festival'