There Are Three Club Hurling Games Live On TV This Weekend

The action throws in at 5:30pm on Saturday evening with the meeting of Laois champions Clough/Ballacolla and Wexford champions Rapparees in a Leinster Senior Club Hurling Championship quarter-final.

Clough/Ballacolla retained their Laois title earlier this month with a thrilling one-point victory over Borris-in-Ossory/Kilcotton. Rapparees have been waiting for this game since ending a 43-year wait for a Wexford senior title in mid-September.

TG4's first Sunday game was scheduled to be Mountbellew-Moylough against Padraig Pearses. That game has been postponed due to a Covid-19 outbreak.

Instead, TG4 will show the Munster hurling quarter-final between Clare champions Ballyea and Waterford kingpins Ballygunner.

The final game of the weekend returns to county action with the Tipperary Senior Hurling Championship final replay between Loughmore-Castleiney and Thurles Sarsfields.

The two sides drew in the final earlier this month. In the interim, Loughmore-Castleiney won the Tipp senior football title with victory over Clonmel Commercials. They aim to seal an incredible double this weekend. 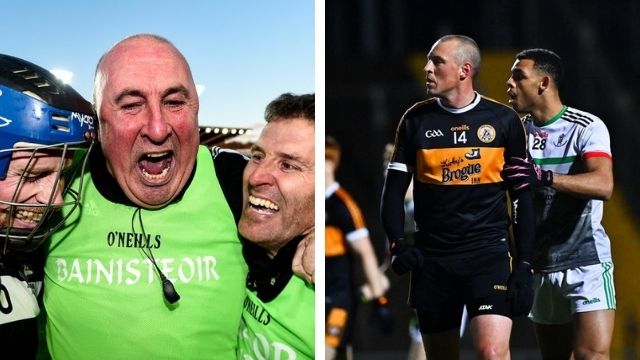