The Gaelic Football Rolling All-Stars: Round 9

It was a weekend that did little for the apathy surrounding Gaelic football, not that the folk of Dublin or Tyrone will care. 54,717 and 49,696 turned out respectively for the weekend's All-Ireland semi-finals and it is now all set for the final two to do battle on Sunday, September 2nd.

Thus, this is the penultimate edition of the Gaelic football rolling All-Stars. Since the very first week of the Championship, each round has been considered and players allocated spots based on their entire championship performance, not one-off good games. For example, Con O'Callaghan was outstanding for Dublin on Saturday but is his overall performance better than Ian Burke's who was superb against Roscommon, Kerry, Kildare and the first half against Dublin?

Here is the ninth round of the rolling All-Stars.

Demonstrated the wide-ranging impact a goalkeeper can have over the course of the year. When Laois desperately needed a last-minute equaliser against Wexford, he drove out the field and laid the ball off. When their defense needed an outlet against Carlow, he came out as a 'sweeper-keeper.' His kick-out success against Dublin's press was remarkable while his shot-stopping in that game and Monaghan one was exceptional.

The youngster enjoyed a superb year under Declan Bonner. In a game as dynamic as the current one, there is an onus on every player to be effective on both sides of the ball and Gallagher embodies that.

Monaghan's Championship dreams came to an end last weekend but it wasn't for lack of trying from Wylie. He has been Malachy O'Rourke's talismanic full-back who also chipped in with crucial scores throughout the year.

4. Gareth Dillon (out)- Michael McKernan (in) 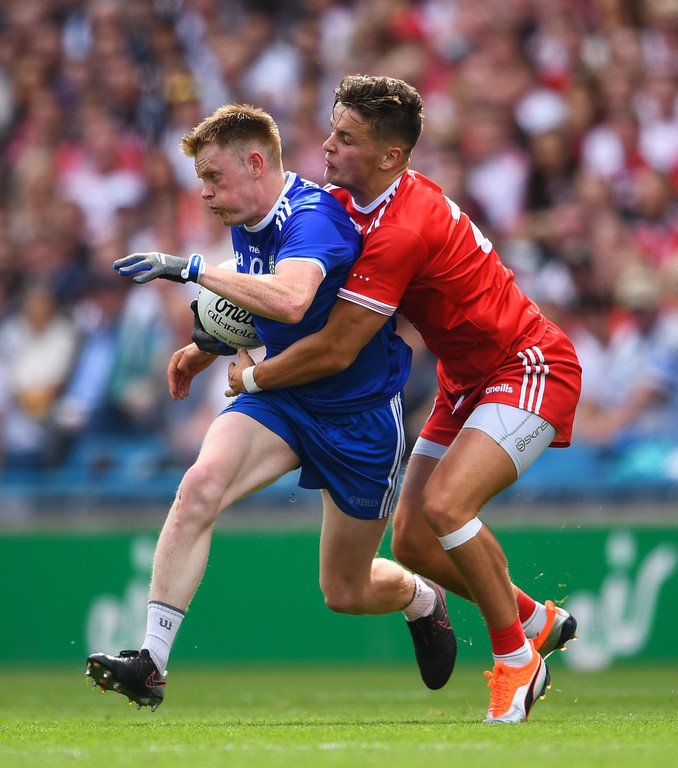 Dillion scored a last-minute equaliser to keep Laois in the Leinster Championship, put the shackles on Paul Broderick to get them into a final and was one of their best players against Dublin but McKernan has been terrific all year and is certainly in the running for Young Player of the Year.

Kevin Cassidy recently hailed him as one of the performers of the Championship and since then he has only strengthened those claims. Monaghan's best player this year which is remarkable given he only took up football when he was 17.

Whether it be at half-back or in midfield, the Ballymun Kickhams man is in the form of his life. A big call for Mickey Harte lies ahead with McCarthy's match-up crucial if they are to have any chance.

McCaffrey did not even play in the league due to a cruciate injury yet is now in the line for footballer of the year. A  phenomenal performance against Galway. 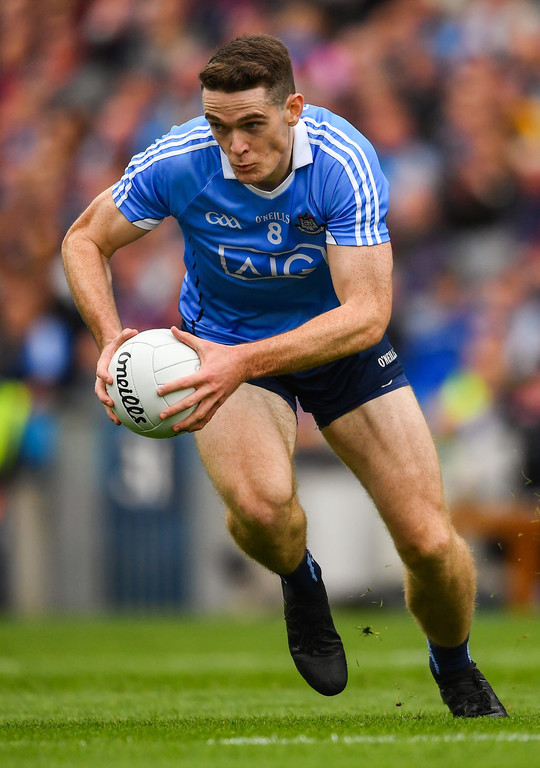 There is seemingly no aspect of Fenton's game that he is lacking in. A Rolls Royce midfielder.

The toughest decision of any in this round. Niall Kearns was sensational this year and if this was not a team but purely the best 15 footballers of the Championship he would be a shoe-in. However, because of Colm Cavanagh Tyrone are in an All-Ireland final and Monaghan aren't. His ability to make crucial plays in big games is a rare skill.

Alan Brogan recently bemoaned Kilkenny's tendency to recycle ball when he could go forward:"I feel a little bit saddened to see players of the quality of Ciaran Kilkenny, for example, moving the ball sideways and backward." On Saturday he got the balance right. 0-3 from play, an assist for Fenton's score and a constant outlet from kick-outs. His third Man of the Match award this year.

He’s in yet another All-Ireland Final and he’s @SuperValuIRL @SkySportsGAA Man of the Match: this explains the look on @DubGAAOfficial Ciaran Kilkenny’s face! #DUBVGAL pic.twitter.com/JZjgbL50i8

Dublin's current style is one of perpetual motion and the key to that is Brian Howard. The Raheny club man covers a remarkable amount of ground and consistently frustrates opponents in 'transition' with his work rate and tackling high up the pitch. 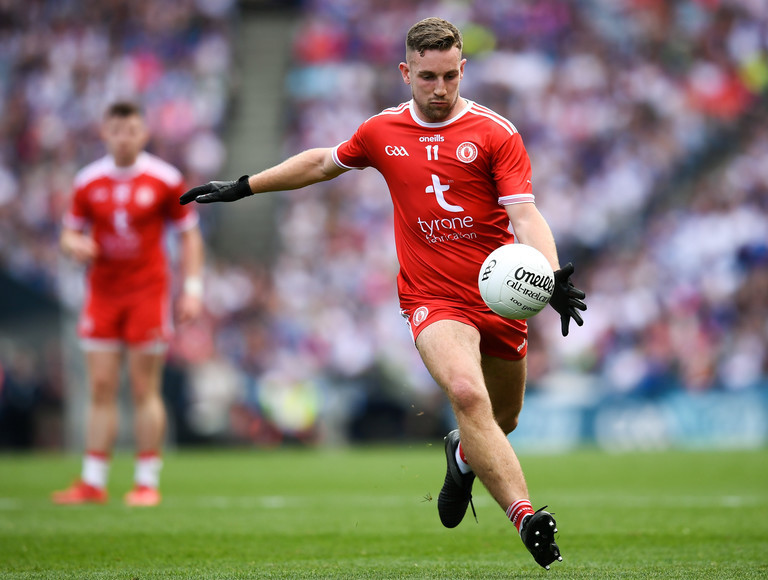 Another brilliant showing from Sludden. His goal proved vital.

Tough on Grugan who's scoring total was remarkable but Mannion's all-around contribution just shades it.

Paul Mannion curls it over the bar! pic.twitter.com/Jy6Blnx8D2 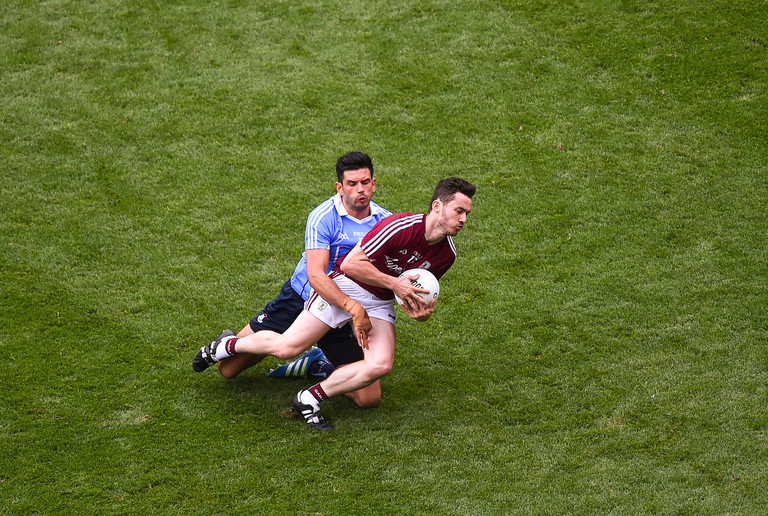 The most assists in the Championship. Scored 0-2 from play against Dublin to cement his status as one of the best inside forwards this year.

His contribution has been a tad underappreciated given Kerry's decline but Clifford's output really was extraordinary. From play this year he finished with Clare (0-1), Cork (0-2), Galway (1-4), Monaghan (1-3), Kildare (1-4.)

That’s 78% (4–14 from 23) in total scoring ~11 points more than an avg intercounty player would #Yeesh pic.twitter.com/mTuVycDcZP

GAA
6 hours ago
By PJ Browne
Tiernan McCann Decision Part Of Worrying Trend For Tyrone
GAA
3 months ago
By Eoin Harrington
Why The GPA Are Backing The New Football Championship Proposals
GAA
4 months ago
By PJ Browne
'I Sent A Message To The Group Early In The Week, 'No Social Media''
Popular on Balls
Rugby
9 minutes ago
By Jonathan Byrne
'People Can Say What They Want' Jack O'Donoghue On Munster Criticism
Football
46 minutes ago
By Jonathan Byrne
Roy Keane Enjoyed Dig At Harry Kane For Referee Bias Being 'England Captain'
GAA
1 hour ago
By Eanna O'Reilly
Lorraine O’Shea Goal Crucial As Mullinahone Reach All-Ireland Final
GAA
1 hour ago
By PJ Browne
Insane Drama As Late TJ Reid Goal Sends Ballyhale Into All-Ireland Final