Keith Higgins Happy To Look At The Bigger Picture For Mayo

"Just a few small bits of niggly injuries I need to get right."

The Mayo legend has only featured briefly in this year's Allianz Football League. He came off the bench to play just over 12 minutes in the opening round draw with Donegal but missed the defeat to Dublin and the victory against Meath last time out.

Despite being well into his 30s, Higgins was always going to return for another season.

"Once I had a chat with James back in October or November time, it was a fairly easy decision to make," he says.

If you're being given the opportunity you want to keep going for as long as you can. Once we worked a few things out it was all good to go and I'm looking forward to it again. I just want to get back in there and play a few games at this stage.

If you had told me then that I'd get five or six seasons I'd have said that was good going. Look, the main thing is that I've been extremely lucky with injuries, that's been the key.

You'll be long enough not playing it too, so you might as well stay going for as long as you can.

Higgins made his championship debut way back in 2005 against Roscommon. The majority of his time in the inter-county game has been spent as a defender. Though, there were two years where James Horan deployed him as a forward. 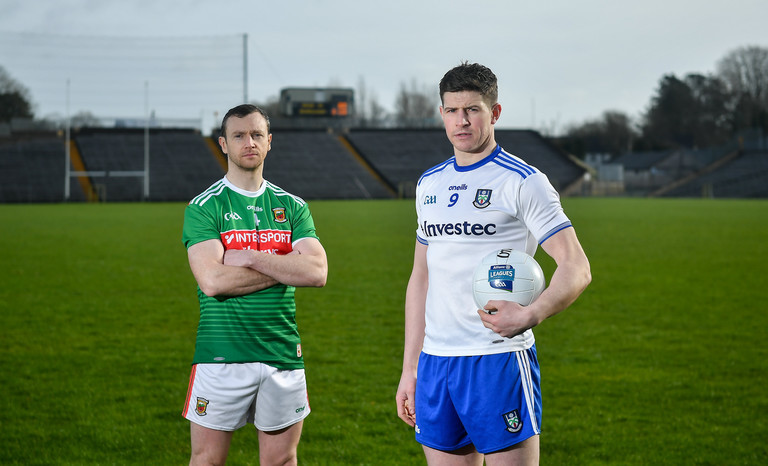 Darren Hughes of Monaghan, right, and Keith Higgins of Mayo during a Media Event in advance of the Allianz Football League Division 1 Round 4 match between Monaghan and Mayo on Sunday at St. Tiernach's Park in Clones, Co Monaghan. Photo by David Fitzgerald/Sportsfile

"Defending definitely has changed over a period of time," he says.

"If you were to go back 10 years ago, there was so much one-on-one stuff that you had to really just look after yourself.

"Then when all the blanket defences and sweepers came in the game changed. You were defending in a different way with lots of numbers back.

"It's probably come full-circle a small bit now with the new mark rule, but some things won't change. Teams will still try to get numbers back, but you do have to be aware of the mark, especially when the ball is kicked in close to the goals.

"So, yeah, it's changed, but with the way teams are playing now there are less one on ones than when I started playing at this level."

A Mayo defence which seemed set in stone for so long has seen some new faces introduced during this year's league - Padraig O'Hora and Oisin Mullin being the main names.

"Padraig was there last year but didn't get many games," says Higgins.

"This year, in fairness to him, he's playing and is working his socks off. His performances are reflecting that hard-work. He's been very solid for us in the last three games.

"Oisin has come in from the U-20s and he's a really good footballer with a very good engine. The two boys have been really big additions, especially with a few boys out injured. You need new fellas like this coming through. Hopefully, they'll keep going from strength to strength.

"It's important that the experienced guys offer that bit of advice to the younger lads. But you have to balance that with helping them all you can but also you want to start yourself.

"It's a fine line, but you have to look at the bigger picture and the more lads we have coming through the better."

The Rewind
19 hours ago
By Gary Connaughton
The Rewind Random Quiz: Can You Identify The Irish Celebrity From Each County?
14