Dublin lost their O'Byrne Cup semi-final against Longford at Pearse Park on Saturday. The game was Dessie Farrell's first in charge of the capital's senior footballers.

Longford won the game by a point with the winner - a free from Darren Gallagher - coming four minutes into injury time.

It was an experimental and hastily formed Dublin side. Many of the group which won the county's fifth consecutive All-Ireland spent the earlier part of this month on a team holiday in Bali. Training for them is scheduled to begin on Monday.

In all, Farrell made 23 substitutions in the game. Unlimited replacements are allowed to be made in pre-season competitions. Niall O'Callaghan - younger brother of Con - was one of the standout performers for Dublin, scoring two goals. 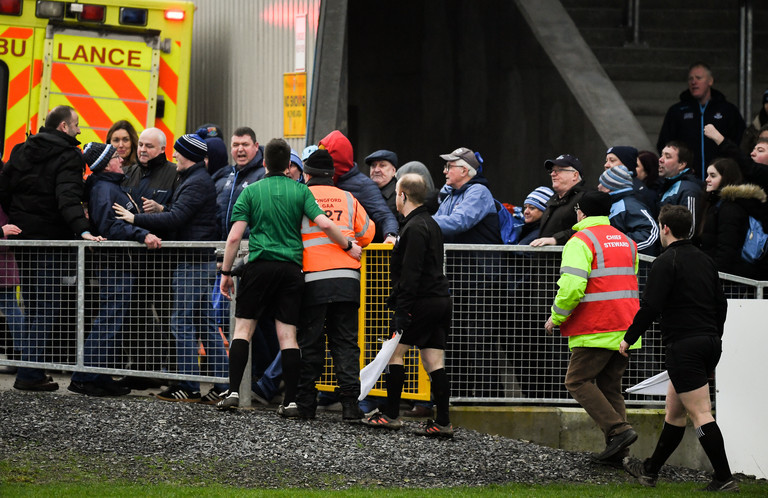 The home side's victory sparked some angry and distasteful scenes at the final whistle with referee Alan Coyne being escorted back to the dressing room by stewards.

The Westmeath man left the field to shouts of 'Cheat, cheat, cheat' from Dublin supporters aggrieved with the official's decisions. Who would be a referee? Even in a competition like the O'Byrne Cup, they are not spared the abuse.

Offaly will play Longford in the O'Byrne Cup final on Saturday after they defeated Westmeath in the other semi-final.

If you find yourself shouting the likes of the above at a referee then do us all a favour & kindly fucking stay at home the next day. You only think you are a "supporter". Truly embarrassing. #GAA#GAA https://t.co/OhTMxUydNQ pic.twitter.com/XjS4OusfDt

Dessie Farrell: 'There Are Two Ways To Live: One As A Timid Soul. The Other Is Do The Things That Frighten You'

GAA
8 hours ago
By Dylan Ryan
Watch: David Clifford Scores An Absolute Rocket In County Final Win
GAA
1 day ago
By Mark Farrelly
Here's The TV Lineup For The First Weekend Of County GAA
GAA
3 days ago
By Mark Farrelly
The New Confirmed Knockout Schedule For The 2020 Munster Championships
Popular on Balls
Football
15 hours ago
By Paul Moore
The Legendary Paul McGrath Is Front And Center In A Show About His Life This Week
5

Football
14 hours ago
By Gary Connaughton
Report: Ronald Koeman Already Getting Tired Of Structure At Barcelona
19