Mayo will be without a host of first-team regulars for Saturday's qualifier against Galway. The latest concerns are Lee Keegan and Aidan O'Shea who both suffered injuries during their victory over Armagh last weekend.

Lee Keegan reportedly suffered ankle ligament damage and is unlikely to play any part in Limerick. The Mayo half-back went down in the first half last Saturday and was taken off. 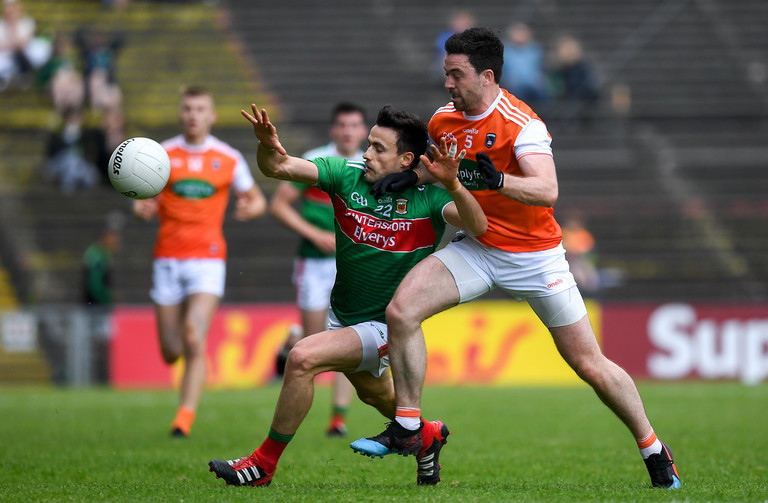 Per the Connacht Telegraph, it has also been confirmed that Aidan O'Shea's right foot is in a cast.  It is said to be a precautionary measure and there is some hope he could recover to play a part this weekend.

During Saturday night’s game with Armagh both Lee Keegan and Jason Doherty suffered ankle injuries. Both players were immediately assessed by the Mayo senior medical team and they are now working on their rehab programmes.

As with any injury or medical intervention the privacy and confidentiality from a medical perspective is important for the players in allowing them the time for a full recovery. We will monitor their progress closely over the coming weeks.

GAA
1 year ago
By PJ Browne
'I Could Be One Of Those Casualties! You Never Know With James'
Previous Next

GAA
7 months ago
By Maurice Brosnan
What David Moran Did Off And On The Ball Against O'Shea And Kerry's Key Man In Mayo Victory
GAA
1 year ago
By PJ Browne
'It’d Be Lovely To Be Able To Bring The Moclair Cup Up To His Grave'
GAA
1 year ago
By PJ Browne
'I Could Be One Of Those Casualties! You Never Know With James'
Popular on Balls
Rugby
9 hours ago
By Balls Team
'That's Ireland's Achilles Heel' - O'Driscoll Identifies 'Blueprint' To Beat Ireland
5