'You Feel Sorry For Yourself For A Few Days, Then You Start Getting No Sympathy'

You can offer Michael Murphy excuses but he doesn't want them, not even those with a real air of legitimacy, possible factors in why Donegal failed to perform against Mayo in Castlebar on Saturday evening.

All were considered and promptly dismissed.

Injuries: "Listen, every team is playing the same thing and every team have their own level of injuries. Mayo, no more than anybody else, have had their fair degree of them."

Donegal being hyped up contenders to beat Dublin: "We were alright anyway, we didn't fully believe in it to begin with."

Having to come through Ulster: "It’s the same for all teams. We felt fit and fresh coming into the games and coming in through the Super 8s."

Playing a deciding Super 8 game away to Mayo: "We had a home game last year in it too [against Tyrone in the final phase], so we can have no excuses at all."

The 30-year-old still felt a rawness over the weekend's defeat - one which knocked his side out of the championship - when he picked up his PwC Player of the Month award for July in Dublin on Wednesday morning.

"Ah, not getting any better at it as the years go on," said Murphy when asked how he deals with losses.

"Listen, you'd be thinking about it every day and thinking about the way you performed and individually. The game goes through your head on repeat, but you just have to get back and get on with it.

"I know from speaking to the boys already, individually, we're all going over it in our heads. Ah listen, we'll meet up in the next week or two as a team and we'll go through the year.

"Even though ultimately it ended in failure, there has been a few positives. We'll briefly mention them but we'll look then straight away at ways to improve in getting over the failures.

"We've failed in the crucial games the last two years in-a-row now against Tyrone and now against Mayo. We'll put a plan in action to get back and at it again. We'll get stuck into it." 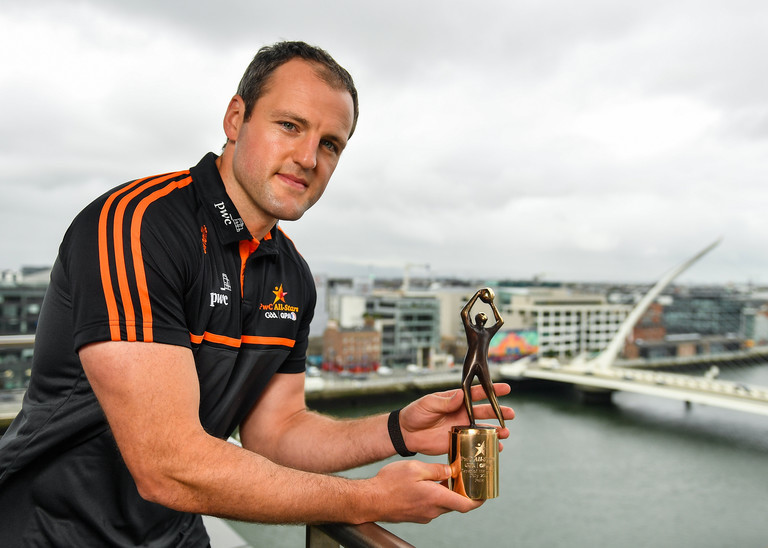 PwC GAA/GPA Player of the Month for July, Michael Murphy of Donegal, was at PwC offices in Dublin today to pick up his award. Photo by Seb Daly/Sportsfile

Murphy believes Donegal brought a level of consistency to their performances this year - apart from in the game against Mayo - which was not there in previous campaigns. They kicked 13 wides on Saturday evening, missing the type of shots they had been slotting over in prior games.

They put you to the pin of our collar, they play aggressive football and that’s something we try to play too but likewise we didn’t do it for long enough against them.

I thought we did it for certain periods without the ball against them, we forced them into mistakes, but they just did it more often than us and unfortunately, our skill levels weren’t as on the money as theirs was.

They’ve got some brilliant defenders without a shadow of a doubt. They start from right up front and they do hit hard, they hit every bit as hard as those two teams [Kerry and Tyrone], and coming out the back of them you feel the same way, you feel shattered.

Stephen Rochford was the headline addition to Donegal's backroom team this year. Murphy said that the panel is hopeful the "top class" Mayo man will continue in the role.

He also hopeful - though you feel there is more certainty than with Rochford - that there will be no major retirements from the Donegal group this winter.

"Everyone speaks about Frank [McGlynn] and Neil [McGee] as two of the older statesmen but they're still relatively fresh.

"I know that within the dressing room they are two huge figures. They have younger souls at heart and are able to respond - they know the chat and the lingo with the younger lads. They're still a huge part of the whole thing.

"I'd be hopeful that they'd be mad hungry to get back again next and give it another lash."

Beyond that additional consistency, Murphy believes Donegal made advances this year - they just didn't show when it really counted.

"Unfortunately it is two big games at two big times of the year that we’ve lost two years in a row.

"That’ll be the target next year, to navigate your way through Ulster, or a back door, to get ourselves in a similar scenario and try and overcome that obstacle."

GAA
6 days ago
By PJ Browne
'We Discussed About Me Transferring To Sligo. I Still Have The Transfer Forms'
5

GAA
1 week ago
By Michael McCarthy
Quiz: Can You Identify These 10 Intercounty Gaelic Footballers?
Previous Next

GAA
6 days ago
By PJ Browne
'We Discussed About Me Transferring To Sligo. I Still Have The Transfer Forms'
GAA
1 week ago
By Gary Connaughton
Former Roscommon Footballer Conor Connelly Passes Away At Age Of 44
GAA
1 week ago
By Michael McCarthy
Quiz: Can You Identify These 10 Intercounty Gaelic Footballers?
Popular on Balls
Football
15 hours ago
By Michael McCarthy
Confirmed: Mick McCarthy Is Gone, Stephen Kenny Is The Republic Of Ireland Manager
76