Revealed: The Best Meath Team Of The Last 30 Years As Voted By You

After a week of debate, the votes have been tallied, and we can our third 15 for 30 team - Meath's best county football team of the last 30 years, as voted by the public.

We received a huge number of votes for a record number of players over the course of the week, but in the end, only 15 could be named.

A few players were clear starters from the beginning. As you would expect, Trevor Giles, Tommy Dowd and Graham Geraghty was basically nailed on as the half forward line from the first day of voting. Darren Fay was uncatchable at full-back from Monday too..

Others had to fight for a place. Bernard Flynn in particular had a very late surge, toppling Brian Stafford from the team despite the Kilmainhamwood man getting the 10th most votes of any player. Meath's unbelievable array of forwards over the last thirty years also screwed 2007 All-Star Stephen Bray who got more votes than four members of the starting 15. As always, we will move players around to an extent to get the most popular players into the team, but the XV must make sense. While Graham Geraghty might have been moved to the backs to accommodate another forward, he overwhelmingly had more votes than anyone else in his position, so it would be unfair to sacrifice him.

In the end, the team displayed shows an unbelievable collaboration of two great teams. The latter years of the first great Sean Boylan team, who made All-Ireland finals in 1990 and 1991, and his second great team, who won All-Irelands in 1996 and 1999.  In all, there are eight members of the more modern team, five of the old guard, and Meath's Millennium Man Martin O'Connell crossing the lines. Representing the modern era, current co-captain and Meath talisman Donal Keogan could have played and dominated in any era and was selected on the team with many votes to spare. 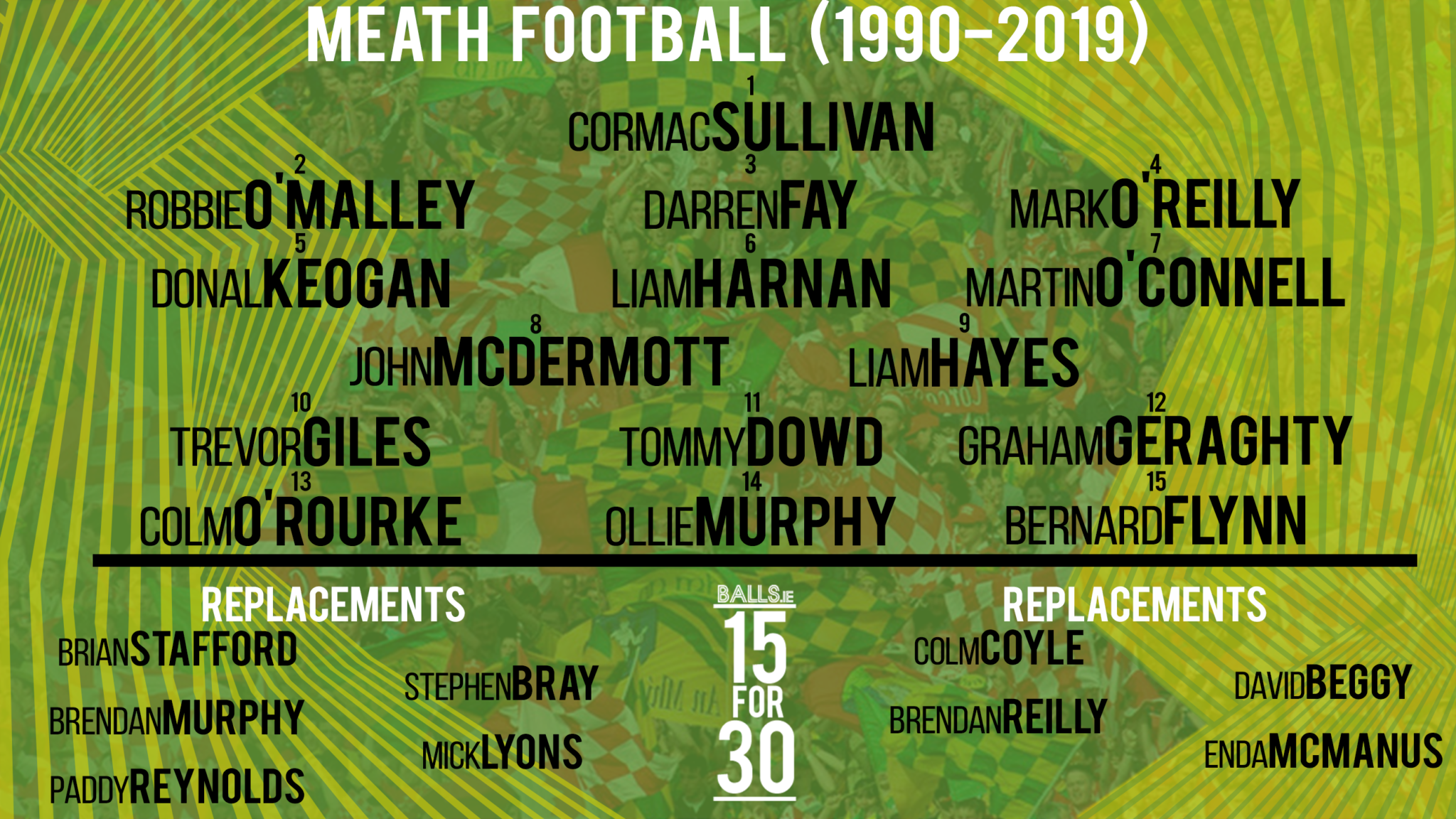 The main battles were in the forward line as already mentioned, in goals, where Cormac Sullivan just beat out Brendan Murphy, and in midfield, where there were a number of contenders to join John McDermott including Gerry McEntee, Nigel Crawford and Bryan Menton.

Up next, we'll be moving back to hurling for the 15 for 30, and the county of Tipperary. Tipp have been up and down a lot over the last 30 years but have won 5 All-Ireland titles in the time, with several very different teams. It makes it the most successful county we've selected yet, and could be among the most contentious. We're looking forward to getting the debate going on Monday.

SEE ALSO: The Best Waterford Team Of The Last 30 Years As Voted By You

SEE ALSO: The Best Donegal Team Of The Last 30 Years As Voted By You