'I'm Made For This': Shane Lowry Inspires Europe With Epic Putt

For the last month, Shane Lowry has spoken about how playing in this Ryder Cup is the apex of his career. Last night, he assured that his name will be remembered in Ryder Cup lore alongside other Irish golfers who made their name in this competition.

Paired with Tyrell Hatton in the first session of the afternoon fourballs, with Europe's hopes hanging by a thread, Lowry played 18 heroic holes and won a much-needed point as Europe attempted to mount a comeback against a far superior American team. More importantly, Lowry injected passion into a European team who - outside of the Spanish pairing of Rahm and Garcia - have looked lifeless all weekend.

Shane Lowry had a nerve-jangling twenty-foot putt to secure the point for Team Europe. He sank it, and whatever happens today at Whistling Straits, it will enter into whis personal highlight reel for the rest of his career.

The Irishman sinks a nerveless putt for par as #TeamEurope get a fourth point on the board! 💪

Look at that emotion! 😍

To make things sweeter, Lowry's father Brendan was watching the shot behind his left shoulder.

Afterwards, Lowry dedicated the putt to his mother, who celebrated her birthday yesterday.

Shane Lowry did a fascinating interview after the victory where he said he actually had a word with his caddy before he hit the putt.

He also explained why he hasn't given up hope yet that Europe can achieve a miracle.

I'm not stopping believing. I'm having the week of my life here. I honestly am. It's been an incredible experience. I really hope we can go out and give them loads tomorrow. All morning I was thinking of Medinah...you know there's such a good bond in our team room. We didn't get the breaks yesterday. We got hosed. It's disappointing. But I was laying in bed thinking about it, and said to Tyrell we're probably getting a lot of stick back home and getting a lot of stick from everyone else, and the captain and the vice captain are getting a lot of stick for their pairings or whatever, because everyone's a genius when you're not doing well, and that's all we can do. And I did that today and Tyrell did that today, and I'm so happy I can bring a point back for my team.

He also explained the source of his motivation in a media session after the game.

'I saw something on my phone that said 'If you have a 1% chance, you need to have 100% faith.' And that's been my attitude,' Shane Lowry said.

Lowry's transformation over his 11 year professional career - from that rainy weekend in Baltray in 2009 to Ryder Cup fame at Whistling Straits is pretty amazing.

Lowry's play was excellent throughout his round, and it gave credence to the theory that European team captain Padraig Harrington got his team selection wrong in the morning session by resting Lowry.

Today the Clara man will be third out for Europe and will have the mammoth task of playing Patrick Cantlay, one of America's MVP candidates so far. No team has ever fought back from down six, and the performance of the third and fourth European pairings yesterday evening do not give one hope, but as long as Shane Lowry is playing, Europe will have a chance. 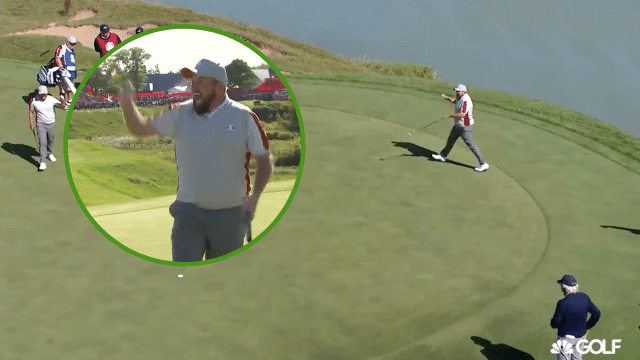 Golf
3 months ago
By Conor Breslin
Rory McIlroy Reveals Why He Was So Emotional After The Ryder Cup
Golf
4 months ago
By Eoin Harrington
'He's Mismanaged Lowry' - Americans Slam Harrington's Ryder Cup Team Selections
Golf
4 months ago
By Eoin Harrington
Rory McIlroy Dropped For Saturday's Ryder Cup Early Session
Popular on Balls
GAA
2 days ago
By PJ Browne
Insane Drama As Late TJ Reid Goal Sends Ballyhale Into All-Ireland Final
Rugby
1 day ago
By Colman Stanley
Yesterday Was Not The First Time Wayne Barnes Sent A Player Off For Getting Lippy
Rugby
22 hours ago
By Colman Stanley
Champions Cup Predictions And Permutations For The Irish Provinces
The Rewind
2 days ago
By Jonathan Byrne
The Definitive Ranking: Deli Items Ranked From Best To Worst