Max Verstappen and Lewis Hamilton tangled at the top of the Saudi Grand Prix and it was a crazy, crazy watch.

Many Formula 1 fans were finding it hard to keep up with all the action in what has been a chaotic weekend of racing.

The Saudi Arabian circuit - billed as the 'fastest street track' - already amounted to Charles Leclerc crashing out of practice and Verstappen on the final turn of qualifying.

Now on race day - it was nothing short of eventful as there were crashes, penalties, delayed starts, red flags and arguments galore.

Mercedes lead the race early as Lewis Hamilton and Valtteri Bottas were able to hold on to first and second with Verstappen in third.

Bottas was acting as a shield to try and keep the Red Bull driver at bay. He did a good job over the first few laps but some questioned how far he went.

10 laps into the race - Haas' Mick Schumacher was the first driver to bow out as he crashed heading into Turn 21.

Mick Schumacher crashes into the barrier at Turn 21!

Mercedes choose to pit under this caution period, Max Verstappen stays out and takes the lead.

Hamilton and Bottas decided to pit as the safety car was brought around after the crash. Max Verstappen opted to stay out.

Minutes after Schumacher's crash - a red flag was called and Verstappen's gamble in not pitting seemed to pay off.

The red flag allowed Verstappen to hold on to the lead and undergo a change of tyres without having voluntarily left the track.

As the race began again - Hamilton had the better restart and took the lead but Verstappen managed to overtake him by going off the track.

The race resumed but not for long! 😰

Sergio Perez and Nikita Mazepin have both crashed!!

George Russell is also out!!

But then about a minute after the restart - there was another crash. This time it was Sergio Perez and Nikita Mazepin. Another red flag.

As the cars entered the pit lane to await a second restart - a lot of talk surrounded Verstappen's wild overtake of Hamilton.

The F1 race controller then asked Verstappen to give up his leading position as a result of his actions. Stay with us.

Red Bull negotiated Esteban Ocon's pole position for the second restart. Hamilton would start in second and Verstappen in third.

After the second restart - Ocon started in P1 with 35 laps still to go. It wasn't long before Verstappen made his way into first.

He overtook Hamilton as he did that and there was some contact on the track as he made his move. You couldn't make it up.

A collision between Sebastian Vettel and Yuki Tsunoda brought the safety car around again which made things even more complicated.

Max Verstappen - with half the race to go - managed to hold off Lewis Hamilton while another collision happened on the track.

Sebastian Vettel was involved again. The debris that remained on the track from that crash led to ANOTHER safety car being deployed.

Then came arguably the biggest incident. Max Verstappen was told over the radio to let Hamilton overtake him.

Verstappen slowed down and gave some room for Hamilton but the Mercedes driver didn't seem to know what was going on.

The two collided as Hamilton ran into the back of the Red Bull car. It damaged his front wing as a result.

Max Verstappen was told to let Lewis Hamilton past and he slowed but then Hamilton ran into the back of him!! His front wing is damaged!

Hamilton was visibly furious with his F1 rival in the aftermath. "This guy is crazy man," he said over the radio.

Then Mercedes' Ron Meadows had it out with the race director over the incident. Verstappen was instructed to give up position again.

What ensued was absolute trickery. Verstappen gave up his position but quickly overtook Hamilton again to regain P1 using DRS.

Despite being back in first - Verstappen was given a time penalty for the incident of leaving the track and gaining an advantage earlier.

With six laps to go - Lewis Hamilton then managed to find an opening and overtake Verstappen. He remarkably took the lead.

What a race! What drama!

You couldn't make this up, honestly 🏁

Hamilton clocked the fastest lap down the stretch and managed to hold off his Red Bull rival to win the Grand Prix.

It leaves both on equal points in the Driver Standings and leads very nicely into next weekend's events in Abu Dhabi.

The F1 Championship will be decided on the final weekend with the top two drivers level on points. The narrative writes itself. 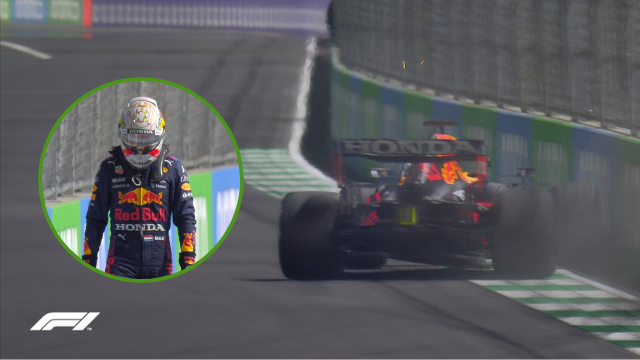