Every week here on Balls.ie, football scribe John Brewin provides player ratings for the latest episode of Succession. As ever, please note this article does contain spoilers.

Will Kendall Roy’s Waystar-Royco coup come off? Hasn't this question been asked on least two previous occasions? The signs are not promising after the second episode of series three. “I think you all get burnt,” as interim CEO Gerri Kellman warns Roman Roy as he considers getting on board with big brother, while the siblings stage an emergency meeting in one of Kendall’s kids’ bedrooms.

That meeting ends in a volley of offensive language, as the quartet squabble like children themselves, and all but Kendall go home crying back home to daddy Logan as he makes his grand return from the Balkans to face down the latest challenge to his empire. We still wait for the third season to lift off. At the moment, it feels like the family feud is in a familiar holding pattern.

But who rated highest, and who might end up on top?

“I’m not a part of this. Necessarily.” From awarding an Uber driver five stars, Cousin Greg wants to keep everyone happy, just as long he ends up with whatever spoils might be on offer. He finds himself torn between three different legal teams, and three different family factions in Kendall, Logan and Ewan, with one-time mentor Tom raining down calls on him. Ewan, Logan’s estranged brother, appears to have sent his unwitting grandson to an anti-capitalist counsel, something for which poor Greg is wholly unsuited for and confused by. He knows he is probably in trouble - “I’m feeling kinda exposed here in my loincloth” - but has little idea why. Another fine comic turn from Succession's family idiot savant, even without long-lost best buddy Tom to riff off.

“If I were to back you against Dad I would have to take over.” Another display to remind that of all the Roy children, nobody is readier to play all sides. And doting husband Tom is usually the last to know in which direction she will be travelling. The one person who can dent her ambition is her father, who retains his continuing ability to dangle a carrot and then sour it, as he does in a final scene that hints at another reverse ferret from Shiv when she is given the symbolic role of “president” working under Gerri. Will that be enough to placate her? Where she’s concerned, only the top, top job will do.

once again the perfect show has logged into chat #SuccessionHBO pic.twitter.com/OOBlZ5voga

“It’s snake linguine.” With the likes of Frank Vernon, Hugo Baker, Karl Muller and Lisa Arthur pushed to the fringes of an episode that concentrates on the Roy children’s intentions, it is left to the stand-in CEO to take care of business while war rages on around her. A screenshot capture of her name on TV news “for my daughters” reveals that even this most solid citizen could get carried away by hitting the big time. Meanwhile, has her kinky friendship with Roman hit a ridge of tension? “I’m an incredibly dangerous enemy” as she reminds him.

Can we talk how adorable is for Gerri to take a pic of her name showing up on tv saying she now assumes as Waystar’s CEO #Succession pic.twitter.com/287amlEF4R

“Rotten Cabal is a good name for a band.” Of the four Roy children, Roman appears most certain that sticking with Logan is the best course of action, with Gerri his stalking horse for eventual power, though she is someone his dad has concurrently detailed him with stalking. He is the most hostile to Kendall and most fearful of Logan, reminding that “he could take us down with his back riddled with harpoons”. Just don’t mention his sexual dysfunction, a twisted nerve Shiv triggers expertly.

For the moment, high ambitions appear to have curbed his tongue a tad aside from the rather cutting accusation that Kendall cannot remember his own daughter’s name. Surely the charm offensive cannot sustain?

“I can’t eat shit, Marcia, I just can’t.” The patriarch is doing his best to look in control of matters, and lock everything back down. That is not always successful. He is troubled when Shiv goes missing, presumed with Kendall and enraged whenever the errant son is mentioned: “No-one talks with the snake”.

Putting on a united front with estranged - and still very angry about his infidelity - wife Marcia is the latest move in a PR drive that includes a staged return to “the city”, including play-fighting with Roman on the airport runway in front of snapping paparazzi. He ends the episode of Succession with a continuing, if loose hold over his children, having spooked them during their council of war by getting doughnuts delivered.

“I don't know whether I love him or hate him, I am going to outsource it to my therapist.” Familiar territory for the prodigal son in Succession. Just when his coup seems to have all the pieces that matter, he is let down by siblings who are even more devious and self-serving than he is. His elevator pitch of surpassing Amazon and “old geezer” Bill Gates doesn’t come off. Meanwhile, getting back in league with Stewie, someone who previously admitted to Kendall that he should never be trusted, shows just how sticky Kendall’s wicket is. Beware the Trojan horse. Bawling out all three of Connor, Roman and Shiv shows the pressure is on, and it may not be long until he falls back on familiar, chemical-support mechanisms.

“We flew back scheduled so that was just delightful.” Just at the moment it seems as if Connor Roy may actually be about to pull himself away from his father’s apron strings, he bottles it and decides to crawl back to dad. “You’re irrelevant,” says Kendall, foolish enough in the first place to even attempt to win over his energy-deficient and parasitic half-brother. “I’m a national figure,” replies the deluded one.

“Do you like to do your house chores in the nude?” Marooned in Bosnia with Logan and the other chief suits, Tom cuts an isolated figure, though appears to be missing Cousin Greg far more than Shiv. “It’s good to know we don’t have an unbalanced love portfolio” he hisses during their awkward exchange of less-than sweet nothings. It suggests a man at the end of his tether. One to watch, though for the moment only Cousin Greg is receiving any proper rough stuff from Tom. 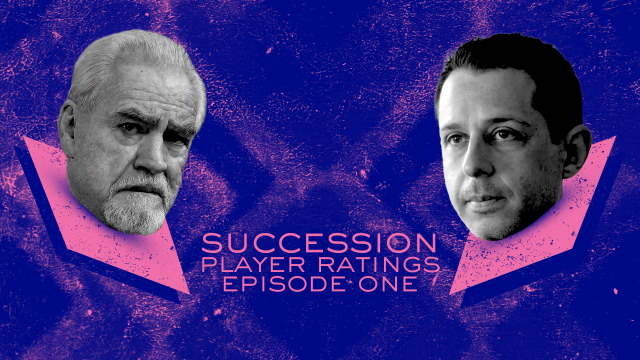