Jake Paul says that his promotion company MVP is working with Eddie Hearn to set up a fight between Amanda Serrano and Katie Taylor.

A fight between Taylor and the Puerto Rican was scheduled to take place in May 2020, but due to the Covid-19 pandemic it was cancelled.

In a tweet earlier this month, Serrano said that YouTube star turned boxer Paul is part of her "business team". Serrano, the reigning WBC and WBO featherweight champion, defended her belts last month against Yamileth Mercado as the co-main event on the Jake Paul vs Tyron Woodley card.

"We’re excited to announce that we’re going to be working with Amanda Serrano, who is one of the greatest female pound-for-pound fighters of all time,” Paul told The MMA Hour.

"We’re actively in talks with Eddie Hearn to try and figure out Amanda Serrano vs Katie Taylor, to make the biggest women’s boxing fight of all time."

Jake Paul says he is in talks with Eddie Hearn to make Amanda Serrano/Katie Taylor#themmahour pic.twitter.com/H2VHUrnBrm

Following Taylor's world title defence against Jennifer Han earlier this month, Hearn said that Taylor will fight again in December, and is then likely to face Serrano.

"I think she fights again in December," said Hearn.

"Then I think she has to fight Amanda Serrano. It's not her fault that fight hasn't been made. It's a mixture of many things, but that's the past.

"Amanda Serrano fancies that fight. I believe she's done a fantastic job to raise her profile. She brings tremendous value to that fight. She can be rewarded for that value.

"I think we can headline that fight at Madison Square Garden, by far and away the biggest fight in women's boxing. We have to do that fight, we have to make that fight, because I fell if we don't it will be a piece missing from a wonderful career."

Leona Maguire: 'I Figured I Needed A Change, And Gave Dermot A Call' 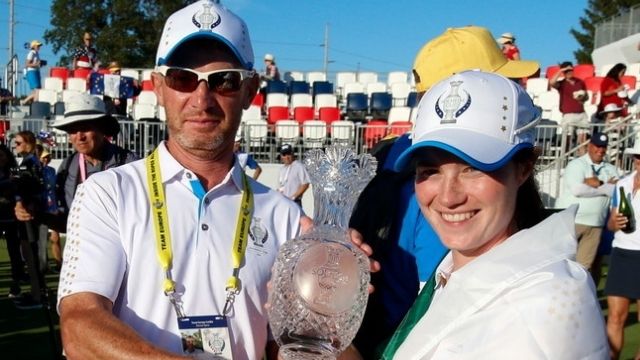