Katie Taylor will wake up this morning in New York City with all of her belts after winning a truly epic fight against Amanda Serrano in Madison Square Garden. However after the fight, Serrano's promoter Jake Paul was keen to project the opinion that his fighter deserved at least a draw from the all-out war.

Speaking in the ring after the fight, Paul was interviewed on DAZN over a cascade of boos from Irish fans. The youtuber turned boxer called the fight - which was won by Taylor by unanimous decision - a 'draw at best'.

"It was a draw at best. We thought we won. We thought Amanda won. Amanda performed amazing. But that was fight of a lifetime. That was Arturo Gatti v Mickey Ward. That was incredible. Both women fought their hearts out. It was a historic moment.

"The crowds booing but everyone's winner here tonight. I'd be mad if I was them too. Credit to Katie Taylor for what she's done for women's boxing. Credit to Amanda Serrano. You give to give credit where credit's due. And let's run it back. Like Eddie (Hearn) said. September or October. This fight, this second fight just got a whole lot bigger."

Paul was booed relentlessly by Irish fans as he spoke and eventually a chorus of Olé broke out inside MSG. (ed. - In fairness to the fans of Serrano and the neutrals in the arena, we imagine they were also booing)

After the fight, he tweeted 'robbed'.

Hearn had made the case for Taylor-Serrano 2 at Croke Park after the fight.

"Katie Taylor is one of the greatest things to ever come out of Ireland," he said.

"If we don't go back to Ireland for a fight before her career is done, it will be a big, big shame.

"I think we should run this rematch back in Ireland, let Katie Taylor fight for the first time back in Croke Park."

While Paul grates on many, his presence was essential in making this massive night happen. We look forward to getting him - and Amanda Serrano - over to Dublin in the autumn for some Irish hospitality. 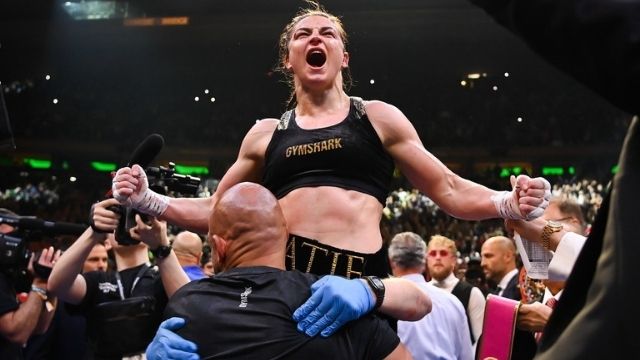