Revealed: The Best Armagh Team Of The Last 30 Years As Voted By You

After a week of debate, the votes have been tallied, and we can reveal our fifth 15 for 30 team - Armagh's best county football team of the last 30 years, as voted by the public.

Over the course of the week, thousands of votes were cast for over 50 players, but in the end, only 15 could be named.

Some of the positions turned out to be straight forward. The six forwards who made it into the team had the six most votes of any players. They were never going to be caught. Likewise, the full back line looked set from early on, while Kieran McGeeney was always going to be number 6.

The biggest battles were in goals and for the second midfield slot alongside Paul McGrane. In the end, 1999 captain Jarlath Burns won that honour, but the competition was so fierce between himself, Niall Grimley, John Toal, Tony McEntee, Charlie Vernon, and even his son Jarly Óg, that he gets on the team despite only having the 18th most votes. Former captain Ciaran McKeever and pre-glory years star forward Ger Hoolahan can be considered very unlucky.

Also unlucky is the man who received the 14th most votes of any player. All week the battle between goalkeepers Paul Hearty and Benny Tierney was incredibly close. In the end, both players received a huge share of votes, but Hearty made it in with just 38 votes to spare. 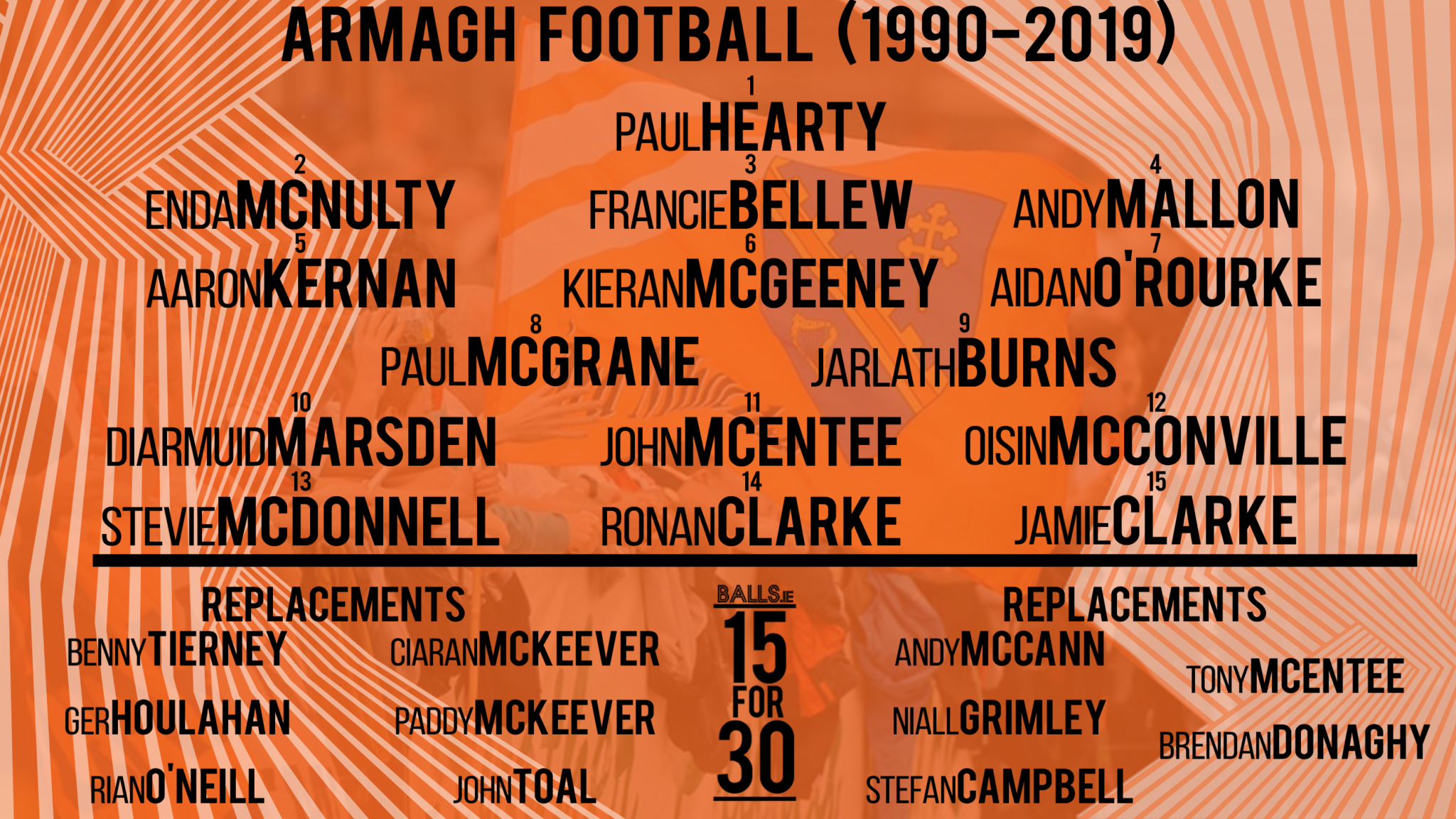 In the end, 10 of the 2002 All-Ireland winning starting team made the XV here, including five of the six forwards. Paul Hearty, Aaron Kernan and Andy Mallon all experienced the post All-Ireland glory years for Armagh, while Jarlath Burns is the only selection of players who finished up before the real success came. Of the current crop, only Crossmaglen's Jamie Clarke made the cut.

Incredibly, the six forwards to made the team had the more votes than any other players, even including three time All-Star and former Footballer of the Year Kieran McGeeney. Stevie McDonnell topped the poll with Ronan Clarke and Oisin McConville not far behind him.

Up next, we'll be sticking with football for the 15 for 30, and  moving west to the county of Mayo. This one should be fun. While Mayo obviously haven't won an All-Ireland in the last 30 years, this is as successful a run a county could have without winning the ultimate silverware. They've contested eight All-Ireland finals in the last 30 years with three distinctive teams. It will be fascinating to see the make up of the Mayo public's team. We'll be getting the debate going on Monday.