'Excruciating Pain For A Couple Of Hours And Getting It Settled. It Was A Vicious Circle'

In the autumn of 2012, Stephen Ferris had just turned 27-years-old. He was on the back of a starring role in the 2011 World Cup, and had been a linchpin of an Ulster side that had reached the Heineken Cup final. He was a finalist in the 2012 ERC European Player of the Year Award. But that was to be it for the super talented flanker. An ankle injury sustained in November 2012 kept him out of the game for 15 months. When he returned in March 2014, something still wasn't right. That summer, aged 28, his career was over.

The 22-times capped out-half Carbery injured his ankle in the World Cup game with Italy just over a year ago. He has returned to come off the bench in Ireland second game of the tournament against Japan and remained in the matchday squad for the remaining games. However, the ankle had not fully healed and after other injuries also limited his appearances this season, he elected to have surgery in February. It was originally hoped he'd be able to return in the next few weeks, but Munster have now ruled that out.

Speaking to Balls.ie on this week's Buildup podcast, Ferris expressed his concern with the latest update from Munster regarding Joey Carbery's fitness. Carbery was declared out "indefinitely", a word that certainly rings alarm bells with the rugby watching public, though of course, it's not as clear that it's all bad news for the Munster out-half.

As soon as you mentioned his name there, I kind of got this feeling that something isn't right.

The only person who knows what way his ankle is at the minute is Joey Carbery. He can have all the surgeons telling him that he's going to be OK. He's going to get over that final hurdle. It's going to come good.

That's what I was always told. "Look, hopefully in a couple of months, it comes good," "another surgery, it'll come good," and I was, like, "I don't think it is. It's not getting any better. If anything, it's getting worse. The more I train, the worse it gets. The less I train, the better it gets. The more rest I have, the better it gets. So how are you supposed to play professional rugby at the top of your game?

And that was the deciding factor when I officially retired because the more I trained to put me in a position to play a high level, I just couldn't do it. And my ankle gave in. My ankle was locking during training sessions, excruciating pain for a couple of hours and then getting it settled. It was just a vicious circle.

There's no suggestion that Carbery's injury is as bad as the one that forced Ferris's retirement but the Ulsterman is aware of the pitfalls of a recovery that's gone badly, and just how much the ankle can torment a recovering player, especially one that relies on kicking the ball for a living.

And to go back to my point, I think the only person that really knows where his ankle is at the minute in Joey Carbery. And Joey's probably going to do what I did and just say, "hopefully in the next couple of months things come good." Keep training hard, keep getting physio, and he if he has to go under the knife again, so be it. But it's never, ever good to hear of a young, talented player who is really struggling with an injury at the minute.

Unfortunately, your ankle is the first major joint that hits the ground when you're running. All the weight goes through it. I've had knee trouble before but the ankle was a completely different kettle of fish altogether. And I suppose with him as well, kicking goals and kicking a lot of balls, it's not good. I wish him all the very best and I hope it does come good.

Hear Stevie's full preview of the weekend's rugby & Jason Quigley on Taylor/Persoon on this week's Buildup here https://t.co/j5KpQ9JY5D, or search "The Buildup" on your podcast app pic.twitter.com/YPTE9X5ldE

While Carbery won't be out there, there is real excitement about the return of professional rugby in Ireland this weekend. You can listen to Stephen Ferris's full preview of Connacht Vs. Ulster and Leinster Vs. Munster on the Buildup podcast below. You can subscribe to the show here, or by searching The Buildup wherever you get your podcasts.

On this week's show we also get Jason Quigley's verdict on Katie Taylor's massive rematch on Saturday night, and discuss the government's decision to put sport back behind closed doors from a GAA perspective. 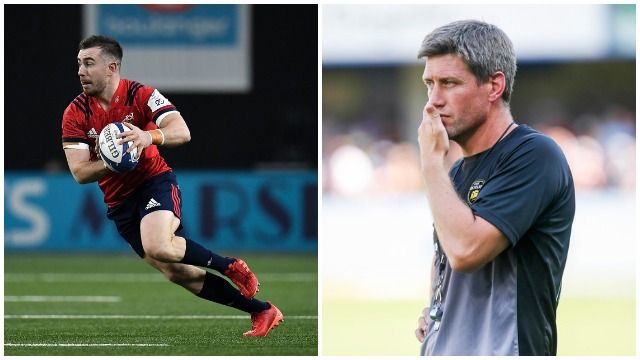